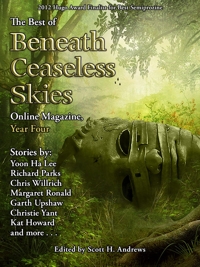 To celebrate the fifth anniversary of BCS and our new ebook anthology The Best of BCS, Year Four, we’re having an ebook sale!

Buy a BCS ebook subscription or the new Best of BCS Year Four from WeightlessBooks.com, and you’ll get a coupon code inside the book for 30% off all BCS anthologies and back issues.

That includes all our previous anthologies, Best of BCS Year One, Year Two, Year Three, and our steampunk anthology Ceaseless Steam. It includes all back issues of BCS at Weightless Books: over 70 issues going back to 2008, with new ones added especially for this sale. It also includes all BCS subscriptions; you can use the coupon to renew your subscription no matter when it’s set to expire.

The Best of BCS, Year Four has eighteen stories for only $3.99, including ones by Richard Parks, Margaret Ronald, Adam Callaway, Chris Willrich, and more. It includes three stories that appeared in Year’s Best anthologies, four that made the Locus Reading list, two that made the Million Writers Award Notable Stories of 2012, and one that’s a World Fantasy Award finalist.

BCS ebook subscriptions are only $13.99 for a whole year/26 issues (that’s 25 cents a story!). Subscribers can get issues delivered directly to their Kindle or smart phone (any device with an email address), and they get the issues early, a week before the website.

Subscribers will get our Fifth Anniversary Double-Issue, featuring Richard Parks and Adam Callaway, before the website, including three stories which won’t be released on the website until two weeks later.

The sale will end in October, so make sure you buy your BCS subscription or Best of BCS Year Four at WeightlessBooks.com soon!