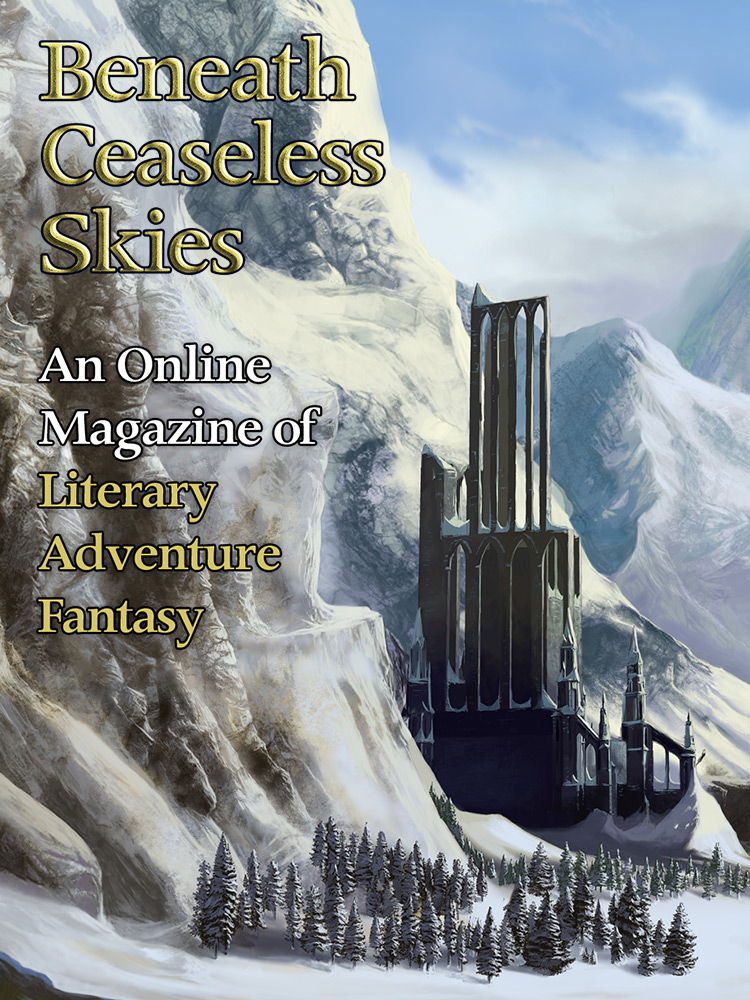 BCS #136 is out, featuring a new BCS author and a returning one, new cover art, and a giveaway for a signed Patrick Rothfuss novel.

Christian K. Martinez (“Death Sent” in BCS #112; “Pridecraft” in BCS #93) returns with “Kurtana,” a tale of a wounded knight who finds herself in a monastery and challenged by a powerful and insightful young woman.

Colorado author C.T. Hutt debuts in BCS with “Walking Still,” a droll Weird Western of a moonshiner huckster wandering into a dry town.

Our new cover art for the winter season in the Northern Hemisphere is  “Ruins” by German artist Stefan Meisl.

The ‘From the Archives’ story with BCS #136 is “Beyond the Shrinking World” by Nathaniel Katz, from BCS #102. It features a knight not unlike the one in “Kurtana,” facing strange challenges of a shifting geographical landscape rather than a shifting mental landscape.

Also, as a special holiday treat, we are giving away a signed Patrick Rothfuss hardcover fantasy novel. To enter the giveaway, leave a comment on that post telling us your favorite BCS story of 2013.

The Parsec Award-finalist BCS Audio Fiction Podcast is on a brief hiatus. In the meantime, check out our past episodes including M. Bennardo, Seth Dickinson, Marie Brennan, Christie Yant, and our special 100th episode, which was a finalist for the Parsec Award: BCS 100: Boat in Shadows, Crossing by Tori Truslow.