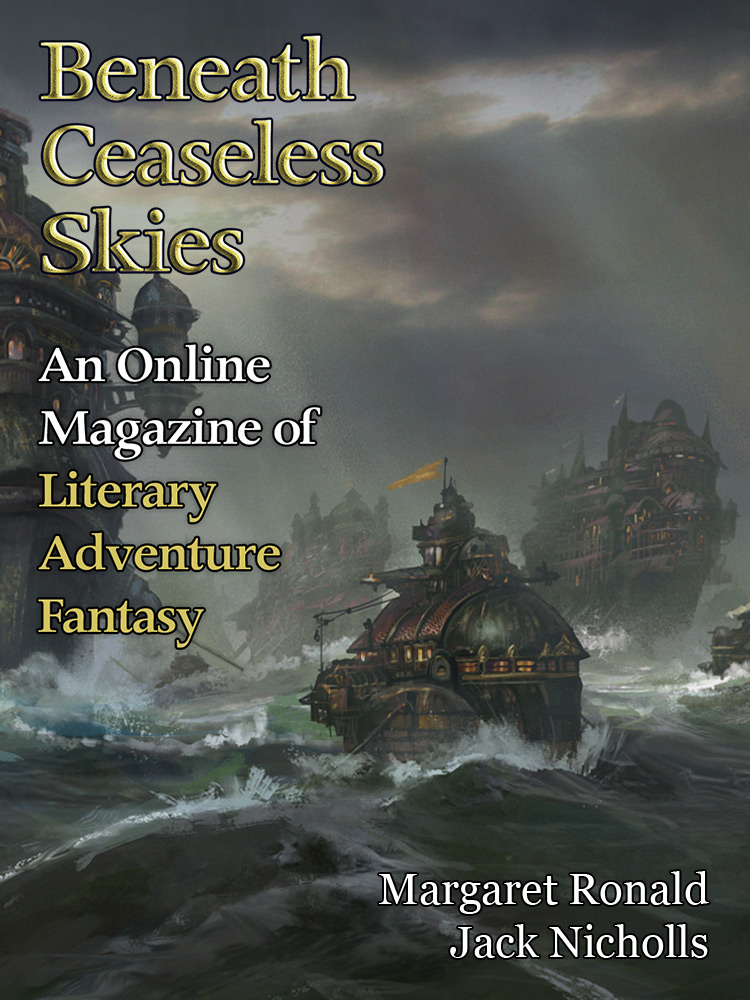 BCS #182 is out today, with two stories of light yet serious tone, a guest-narrated podcast, and yet another giveaway for a newly released epic fantasy novel by a BCS author.

Margaret Ronald (“The Governess and the Lobster” in BCS #95, “Salvage” in BCS #77, among many others) returns to BCS with”Murder Goes Hungry,” another mystery tale set in her multi-ethnic post-war city of “Sweet Death” in BCS #161 and “A Death for the Ageless” in BCS #134.

Jack Nicholls (“The Tale of the Aggrieved Astrologer” in BCS #101) offers “Flying the Coop,” which mixes bits of light tone with a character’s intense struggle.

The BCS Audio Fiction Podcast is BCS 158: Moogh and the Great Trench Kraken, Suzanne Palmer’s tale from BCS #181 of a simple man faced with surroundings and a challenge beyond his wildest experience. It’s guest-narrated by Dan Rabarts, author (“The Crooked Mile” in BCS #127 and the Ceaseless West anthology) and narrator of the BCS podcast BCS 111: The Goblin King’s Concubine by Raphael Ordoñez.

The From the Archives story with BCS #182 is “Cold Iron and Green Vines” by Wendy N. Wagner, also podcast BCS 061, a tale of struggle and independence not unlike “Flying the Coop.”

There’s also a giveaway for a copy of BCS author Seth Dickinson’s new and much-heralded epic fantasy novel The Traitor Baru Cormorant. It features the same protagonist as his first BCS story, “The Traitor Baru Cormorant, Her Field-General, and Their Wounds” in BCS #81 and podcast BCS 73 (beware: the story contains spoilers for the novel). The giveaway is in this post. It ends ends Wed. Sept. 23, so enter soon!