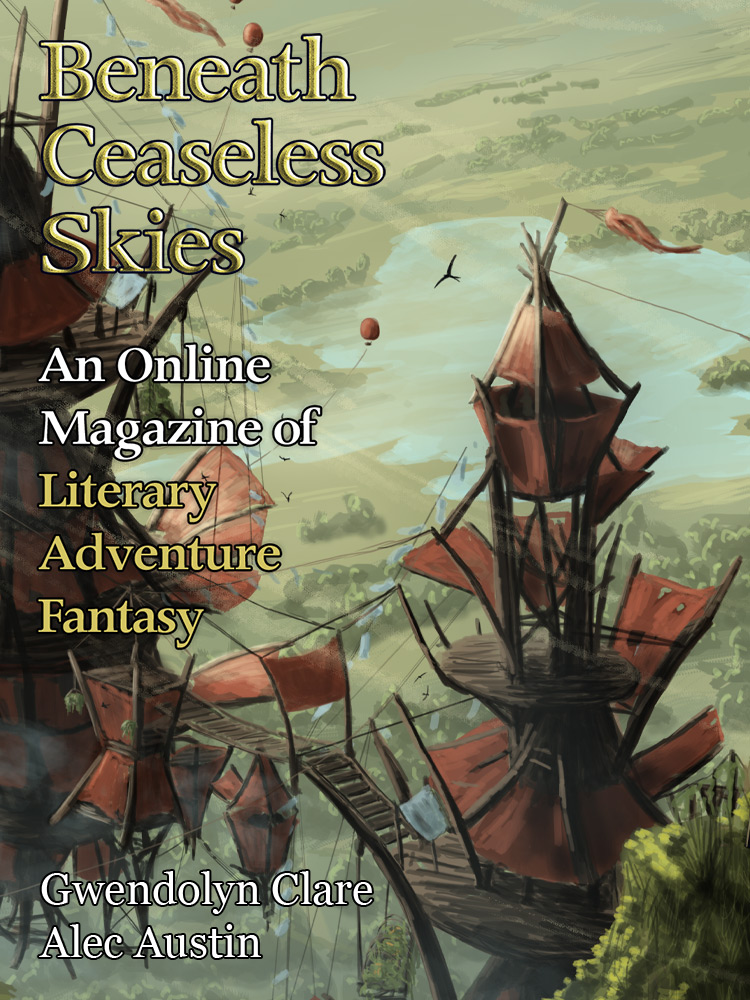 BCS #201 is out today, featuring two returning BCS authors and our longest podcast episode ever.

Gwendolyn Clare (“Butterfly House” in BCS #157, our Sixth Anniversary Double-Issue, and podcast BCS 137) crosses a world of floating islands and stratefied society on an investigation sparked by nested tales in “Nothing But the Sky.”

Alec Austin (“Fire Rises” in BCS #180, “Atonement” in BCS #140, “Casualties” in BCS #110) takes his vividly character-centered military epic fantasy voice back to the world of “Blood Remembers” from BCS #117 in “Blood Reckonings,” a tale of self-empowered characters scheming for leverage.

The BCS Audio Fiction Podcast episode is a special one: BCS 178: The Limitless Perspective of Master Peek, or, the Luminescence of Debauchery, the Catherynne M. Valente novelette from BCS #200. It’s the longest BCS podcast episode ever, clocking in at nearly 70 minutes long. Its lush and rollicking first-person voice is narrated by voice actor Heath Miller.

The From the Archives story with BCS #201 is “Bent the Wing, Dark the Cloud” by Fran Wilde, from BCS #181 and podcast BCS 157, set in a sky-bound world different from that in Gwendolyn Clare’s “Nothing But the Sky” but constrained by similar environmental harshness.

All behind a new crop of our likewise sky-bound new cover art for early summer: “High Above the Savannah” by Martin Ende.