BCS #177 and #178 were reviewed last week by Locus online reviewer Lois Tilton, including one story lauded with her rare “Recommended” rating.

From BCS #177, she praised “Stone Prayers” by Kate Marshall, also available as podcast BCS 155, for its “secondary world where there are myriads of languages, all with multiple words designating subtle distinctions that speakers ignore at their peril... (T)hese details work to enrich the world and the character, who comes alive in all her individual complexity. Recommended.“

From BCS #178, of “The Scale-Tree” by Raphael Ordoñez, she enjoyed “the well-imagined cosmology behind this world, and the views of Zeuxis on the artist’s life.” And she described the events of “The Insurrectionist and the Empress Who Reigns Over Time” by Benjanun Sriduangkaew as “an imprisonment that is clearly a slow seduction as much as a subduing but must also be seen as a courtship... done in mannered, lightly ornamented prose.”

BCS #173 and #174 were reviewed last week by Locus online reviewer Lois Tilton, including one story lauded with her rare “Recommended” rating.

From BCS #173, she called“Out of the Rose Hills” by Marissa Lingen “A quirky story that plays off some fairytale tropes in the person of the shadow woman... Of course... everything the shadow says, is a lie...”

From BCS #174, she said of “The Warriors, The Mothers, The Drowned” by Kay Chronister, also forthcoming next issue as podcast BCS 152: “The story is a kind of mythic mashup, just as Ana’s heritage contains both Aztec and Catholic elements... Characters in fiction and myth often view themselves as exceptions to the rules, which is what this one is largely about.”

And she called “Two to Leave” by Yoon Ha Lee, also available as podcast BCS 151, “An original melding of several classic fantastic tropes, perhaps the strongest being the ferryman, a figure of ancient myth. But the heart of the story is the relationship that develops between the two deadly characters. Delightfully done. Recommended.“

Leave a Comment »
Year-End Praise for BCS
Posted in: Awards and Accolades, Reviews of BCS by Scott H. Andrews

BCS and a number of our stories received prominent mention in the year-end summaries offered by the two major online reviewers in the F/SF short fiction field, Tangent Online and Lois Tilton at Locus online.

Tangent Online shortlisted fifteen pieces from BCS in their 2014 Recommended Reading List, including many with their additional one, two, or three-star rating:

“No Sweeter Art” by Tony Pi

“The River Does Not Run” by Rachel Sobel*

“Silver and Seaweed” by Greg Linklater*

“We Were Once of the Sky” by Yosef Lindell*

“The Breath of War” by Aliette de Bodard**

“The Year of Silent Birds” by Siobhan Carroll

“The Days When Papa Takes Me to War” by Rahul Kanakia

“The Inked Many” by Adam Callaway

“Sweetwater Notion and the Hallelujah Kid” by K.C. Ball*

“The Face in the Window” by Brian McClellan*

“The Unborn God” by Stephen Case***

“A Guest of the Cockroach Club” by M. Bennardo***

In addition, Locus online short fiction reviewer Lois Tilton in her year-end review of short fiction from 2014 called BCS “a long-running success” and singled out several of our stories, all of which had received her “Recommended” rating in her original reviews:

“Crossroads and Gateways” by Helen Marshall

“The Sorrow of Rain” by Richard Parks

“Make No Promises” by Rachel Halpern

Thanks very much, and congratulations, all! 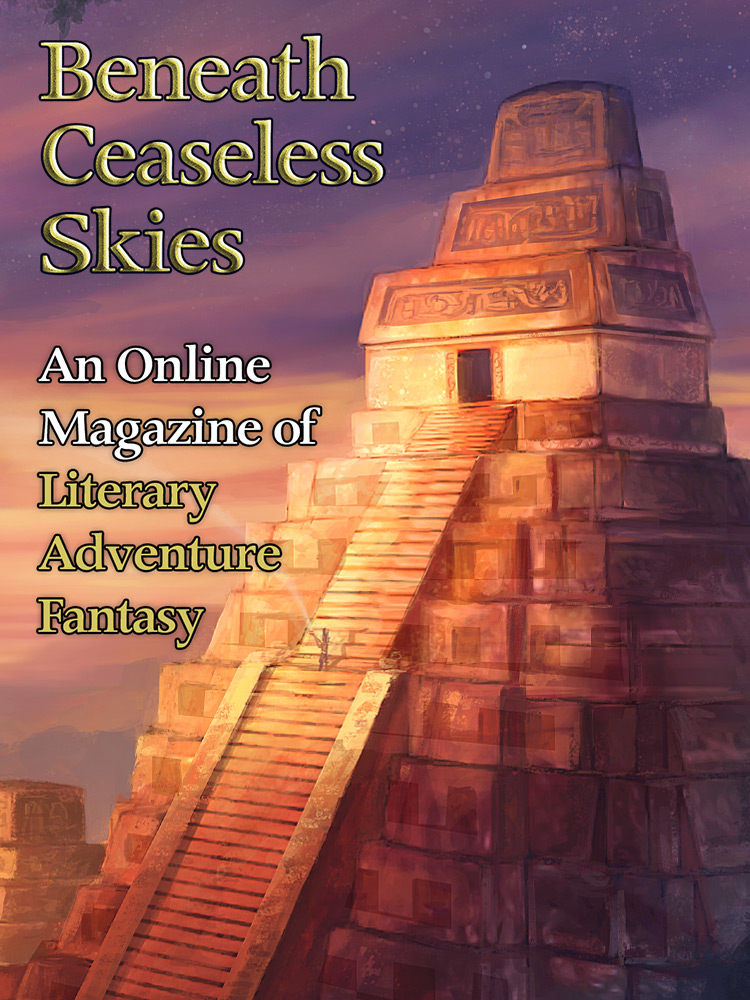 BCS #153 and #154 were reviewed last weekend by Locus online reviewer Lois Tilton, including one story lauded with her rare “Recommended” rating.

From BCS #153, she called “Make No Promises” by Rachel Halpern “A nicely-done tale of godhood, the burdens of rule, and the tension between free will and pre-destiny. Recommended.“

From BCS #154, she said of “Seeing” by Stephen V. Ramey, “The politics of the story here are more complex, more messy, with different interests in conflict with others. The warlord Morshimon proves to be... particularly complex”.

From BCS #140, she called “Atonement by Alec Austin a story of “the evil of unquestioning obedience to orders, of letting this serve to justify the worst atrocities... Recommended.“

From BCS #141, she said of “The Days When Papa Takes Me to War” by Rahul Kanakia, “this tragicomedy of errors is full of neat surprises,” and “Pilgrims” by Ann Chatham she also Recommended.

BCS #141 doesn’t come out until Thursday, but you can buy it right now on ebook at Weightless Books.com or Kindle Store.

Locus online and their short fiction reviewer Lois Tilton singled out several BCS stories in her year-end review of short fiction from 2013:

“Two of my favorites were Richard Parks’ mythic journey into hell in “Cherry Blossoms on the River of Souls” and Tori Truslow’s “Boat in Shadows, Crossing,” with its fantastic Venice-like setting and sex-shifting characters.

BCS 110: Ill-Met at Midnight by David Tallerman, guest-read by narrator John Meagher, was featured as a Top Pick of podcasted genre short fiction in the September 2013 episode of the Synthetic Voices podcast.

Synthetic Voices is a speculative audio fiction podcast that does a monthly review of podcasted F, SF, or H short fiction and selects tops picks from among pretty much every spec-fic podcast out there. They even run a local podcast short fiction discussion group every month in the DC-metro Maryland area.

It’s an honor to be featured alongside audio short fiction from Escape Pod, Clarkesworld, Starship Sofa, and other top short fiction podcasts. Thanks very much!

She had high praise for four of the stories, which she said were all worthy of her Recommended rating. Of Richard Parks’s “Cherry Blossoms on the River of Souls“: “An excellent tale... of reincarnation, karma, and promises. The author’s seemingly effortless mastery of this material is what makes it work so well.”

Of Adam Callaway’s “Walls of Skin, Soft as Paper“: “The final image is quite striking, a sketch of love made with admirable economy of line. There is, in this world, little to love, but the denizens only love all the more what they have.”

“The Coffinmaker’s Love” by Alberto Yáñez she called “A love story that readers may find heartbreaking. I particularly like the image of the coffin as marriage bed”, and “On the Origin of Song” by Naim Kabir she said was “A poignant account of a repressed people in search of liberation.”