A Sin for Freedom
Eboni J. Dunbar
And what was I? The only difference between us was that I had repented.
What the Mountain Takes, What the Journey Offers
Jae Steinbacher
When my lover gets the Burning, I prepare to go to the Binding Place, where the mountain meets the sea. Even in her delirium, she smells the offering meal cooking and sees my half-full pack. She begs me not to go. It’s a journey lovers and pilgrims take—to exchange vows or to petition Mother. The paths to the mountain shift with their travelers’ intentions, and we were much younger when we traveled there to be wed. I squeeze her hand. “I can’t stay and watch you fade.” There’s only one certain cure for the Burning. If I don’t go, Menrie...  Read more »
Recent Comments
Issue #306
Size / Zoom 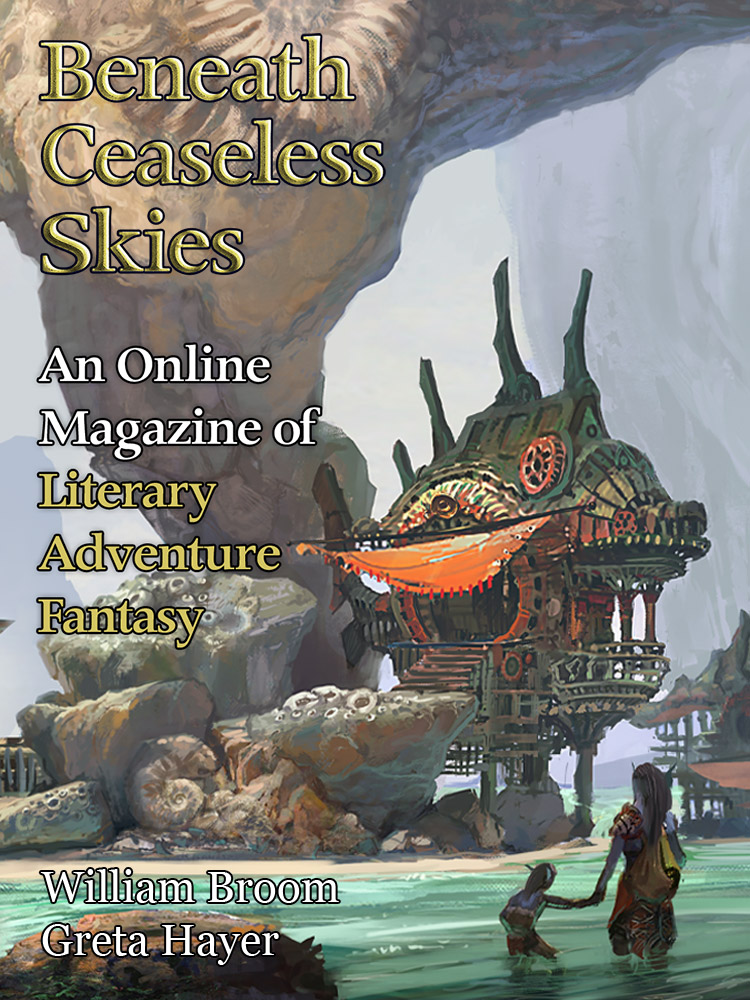 I can recall something about this boy—a memory that dances at the outer edge of my thoughts. This is a sign that it is time to redose. Above all else, I must not allow myself to remember. I pat myself down until I find a hard leather canteen in the inside pocket of my jacket. I pull the canteen out and sniff it. Yes, this is the broth. I take a small sip and wash it down with water.

I do not know when or why I began chasing this boy, but I trust in the self that came before and the self that will come after.
The Augur and the Girl Left at His Door
Greta Hayer

The augur taught the girl to read letters and numbers but not the signs of the flesh. One day, when she was as tall as a fencepost, he came back from the tea fields to see her with his augury book. The anatomical sketches spread out upon the splintered table, the pages yellow and thin as butterfly’s wings. The augur lashed out with such haste it was as though his body had forgotten its age. “This is not for you,” he said, snatching the heavy book. “There is no happiness in some knowledges.”

The augur could read on her skin that she would be cared for by an old man who was not her kin.
Audio Fiction Podcast:
The Augur and the Girl Left at His Door
Greta Hayer

The augur could read on her skin that she would be cared for by an old man who was not her kin.
From the Archives:
Seasons Set in Skin
Caroline M. Yoachim
Horimachi's own tattoos were from before the war, when black ink was made of soot instead of faery blood.
text