A Sin for Freedom
Eboni J. Dunbar
And what was I? The only difference between us was that I had repented.
What the Mountain Takes, What the Journey Offers
Jae Steinbacher
When my lover gets the Burning, I prepare to go to the Binding Place, where the mountain meets the sea. Even in her delirium, she smells the offering meal cooking and sees my half-full pack. She begs me not to go. It’s a journey lovers and pilgrims take—to exchange vows or to petition Mother. The paths to the mountain shift with their travelers’ intentions, and we were much younger when we traveled there to be wed. I squeeze her hand. “I can’t stay and watch you fade.” There’s only one certain cure for the Burning. If I don’t go, Menrie...  Read more »
Recent Comments
The Best of BCS, Year One 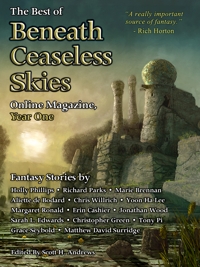 A poet and a thief must carry a magic sword that makes them alarmingly cheerful....

A god made of corn stalks haunts a woman whose heart was cut out....
A samurai investigating a ruined mansion finds a ghost of his long-dead brother....
These and other fantastical tales await in The Best of Beneath Ceaseless Skies Online Magazine, Year One, an ebook anthology of fourteen stories from the first twenty-six issues of Beneath Ceaseless Skies Online Magazine.
The Best of BCS, Year One features such authors as Marie Brennan, Richard Parks, and Aliette de Bodard. It includes “Thieves of Silence” by Holly Phillips, named to Locus‘s 2009 Recommended Reading List, and “Father’s Kill” by Christopher Green, winner of the Aurealis Award for Best Fantasy Short Story of 2009.
“Each story works on an elevated level, and challenges the notions that high fantasy is cliche or just escapist.”
—Bibliophile Stalker
“If you like well-written fantasy fiction, this is a great addition to your library.”
—John Klima, Editor of the Hugo Award-Winning
Fanzine Electric Velocipede

The Best of BCS, Year One is available for only $2.99 in five different ebook formats, including for Kindle, Sony Reader, Palm, Barnes & Noble Nook, and Stanza for iPhone/iPod Touch/iPad. Read it on your e-reader, smartphone, laptop, or tablet.
Buy it or download a free preview at:
Weightless Books, as PRC, EPUB, PDF
Amazon Kindle Store, in Kindle format
BarnesandNoble.com, for Nook users
KoboBooks.com
Oyster Books
Apple’s iBookstore, for iPad/iPod users
All proceeds go to pay BCS authors and artists for their work.