A Sin for Freedom
Eboni J. Dunbar
And what was I? The only difference between us was that I had repented.
What the Mountain Takes, What the Journey Offers
Jae Steinbacher
When my lover gets the Burning, I prepare to go to the Binding Place, where the mountain meets the sea. Even in her delirium, she smells the offering meal cooking and sees my half-full pack. She begs me not to go. It’s a journey lovers and pilgrims take—to exchange vows or to petition Mother. The paths to the mountain shift with their travelers’ intentions, and we were much younger when we traveled there to be wed. I squeeze her hand. “I can’t stay and watch you fade.” There’s only one certain cure for the Burning. If I don’t go, Menrie...  Read more »
Recent Comments
The Best of BCS, Year Six 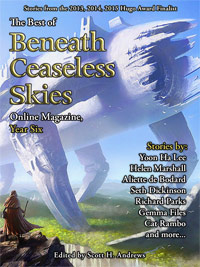 A young woman climbs a mountain for a last glimpse of the nonhuman child she carved from living stone....

A general crosses a desert of temples and sentient winds who know her past and future....

A mute veteran struggles with her emotional scars and the vicious pet crow of her asylum’s warden doctor....

A mage inhabits animal figurines blown from molten caramel and bargains with spirit gods for his father and himself....

These and other awe-inspiring stories await in The Best of Beneath Ceaseless Skies Online Magazine, Year Six, a new anthology of twenty-two stories from Beneath Ceaseless Skies, the Hugo Award-finalist online magazine that Locus online credits with “revive(ing)... secondary-world fantasy as a respectable subgenre of short fiction, raising it from the midden of disdain into which it had been cast by most of the rest of the field.”

The Best of Beneath Ceaseless Skies Online Magazine, Year Six is available for only $3.99 from major ebook retailers including Kindle, Barnes & Noble, iTunes/iBooks, Kobo, WeightlessBooks.com, and more.

Buy The Best of BCS, Year Six or download a free preview at:

All proceeds from the sale of The Best of BCS, Year Six go to pay BCS authors and artists for their work. Buy a copy to read great literary adventure fantasy and support Beneath Ceaseless Skies.