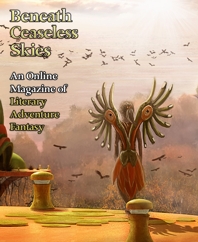 Our Reader Poll last year for a story to go into The Best of BCS Year Two was so much fun that we’re doing it again this year!

In this poll, readers and fans will get to pick a story for inclusion in the upcoming Best of BCS, Year Three anthology.

How It Works:  Voting will be in two rounds–this first round here in this post, where you can vote for five stories out of all 28 eligible stories, and a second round run-off between the five stories that get the most first-round votes.

To vote in the first round: Post a comment in this thread, listing your favorite five stories from the third year of BCS. (That’s Issue #53 through Issue #78. A full list of the stories is in this post below the More tag). First-round voting is now closed.

Voting for the second round ends this Fri., Aug 10, at midnight Pacific Time.

Camille Alexa, Over a Narrow Sea
Corie Ralston, Mamafield
Jesse Bullington, The Adventures of Ernst, Who Began a Man, Became a Cyclops, and Finished a Hero