In multiple past years, he has called BCS “a really important source of fantasy.” This time, he said of BCS that “2012 was its best year yet.” 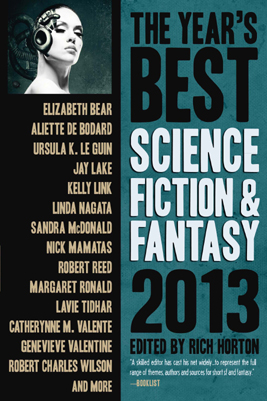 He mentioned his favorite two stories, which he included in his Year’s Best SF&F 2013:  “The Governess and the Lobster” by Margaret Ronald and “The Castle That Jack Built” by Emily Gilman.

Two other BCS stories, he said, were on his final shortlist for that Year’s Best: Chris Willrich’s “The Mote-Dancer and the Firelife,” from our science-fantasy month, and Richard Parks’s “In the Palace of the Jade Lion.”

Thank you very much! Congratulations to all these cool authors and great stories!