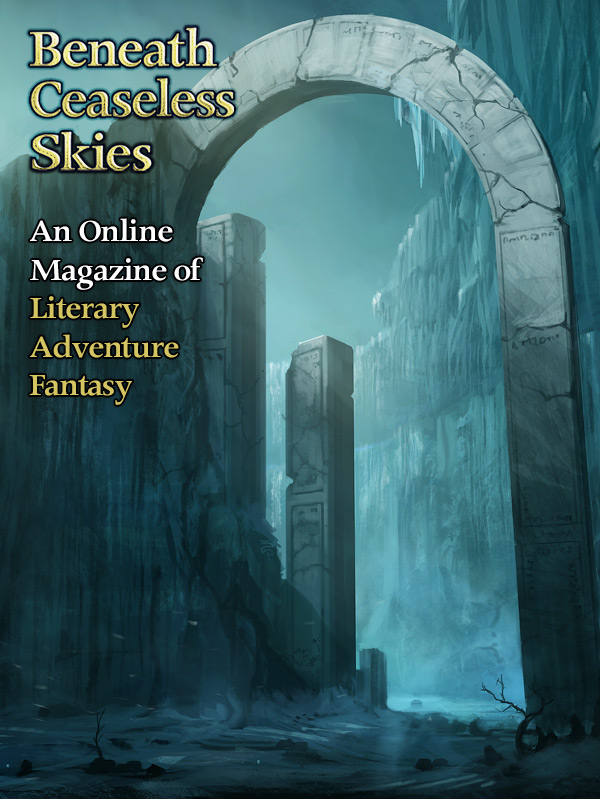 BCS #113 is out today, featuring stories by two authors new to BCS.

Tori Truslow’s “Boat in Shadows, Crossing” weaves between an intertwined array of characters and their  encounters in a tropical canal city. “Misbegotten” by Raphael Ordoñez follows a character escaping through a strange landscape of carnival trailers and rail yards.

The BCS Audio Fiction Podcast episode is BCS 096: Death Sent by Christian K. Martinez, set in the same world as his story “Pridecraft” that was podcast episode BCS 081.

Our From the Archives story is “A Spoonful of Salt” by Nicole M. Taylor, from BCS #79, which has a similar feel of intertwined characters and encounters as “Boat in Shadows, Crossing.”

Also, during the run of this issue BCS is giving away two signed and dated copies of Richard Parks‘s gorgeous new Lord Yamada short story collection Yamada Monogatari: Demon Hunter.  It features a bunch of Lord Yamada stories, including some from BCS and others from past fantasy magazines.

The second giveaway will be held next week on the BCS Twitter feed @BCSmagazine, details to come. The first giveaway, on the BCS website, is already underway.  See this post for rules and to enter. Good luck!

Read Comments on this Post (1 Comment)
Share this
Comments & Scrivenings
Leave a comment on “BCS #113 – Truslow, Ordonez, Martinez; Lord Yamada Book Giveaway”
» Raining and Pouring Nicole M Taylor
[...] Bonus! My story “A Spoonful of Salt” is the featured “From the Archives” tale at Beneath Ceaseless Skies. [...]