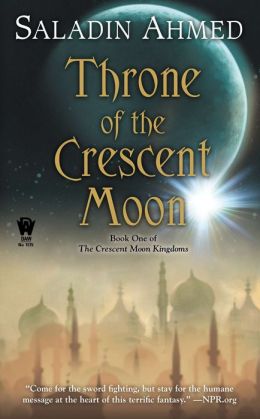 To celebrate the 100th episode of the BCS Audio Fiction Podcast, in addition to the special reading for episode 100, we are giving away two copies of the audiobook of BCS author Saladin Ahmed‘s fantasy novel Throne of the Crescent Moon.

The first giveaway is taking place here on the BCS website, in this post. It ends Wed. Apr. 3.

The second giveaway will take place Wednesday Mar. 27 on the BCS Twitter feed @BCSmagazine. It will run from 2 PM EST until 6 PM EST.

To enter, all you need to do is tweet what your favorite episode of the BCS Audio Fiction Podcast–your favorite BCS podcast story–is.

That will enter you in a random drawing for the audiobook. For the Full Rules, click ‘Show Hidden Text’ at the end of this post.

BCS 098: Sate My Thirst with Ink and Blood, by Adam Callaway

BCS 090: Worth of Crows, by Seth Dickinson

BCS 086: The Three Feats of Agani, by Christie Yant

BCS 080: Bearslayer and the Black Knight, by Tom Crosshill

BCS 055: The Ghost of Shinoda Forest, by Richard Parks

BCS 044: And Blow Them at the Moon, by Marie Brennan

All entries will be entered in a random drawing to win the audio book.

BCS will conduct the random drawing from all eligible entries. If availability permits, the winner might get their choice of audio format between Audio CD and MP3 CD. The audiobook of Throne of the Crescent Moon will be mailed to the winner.