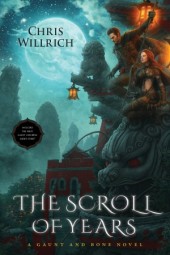 Persimmon Gaunt and Imago Bone, Chris Willrich’s duo of poet and thief who appeared in the very first issue of BCS five years ago, now return in Chris’s debut novel The Scroll of Years.

In conjunction with the fifth anniversary of BCS, we are giving away two copies of The Scroll of Years, signed and personalized by Chris!

The first giveaway was last week here on the BCS website.

This second giveaway will take place Wednesday Oct. 16 on the BCS Twitter feed @BCSmagazine. It will run from 2 PM EST until 6 PM EST.

To enter, all you need to do is tweet what your favorite fantasy fiction duo is. (For the Full Rules, click on ‘Show Hidden Text’ at the end of this post.)

To get you started, here are a few BCS stories that feature a duo of rougish protagonists:

“The Jewels of Montforte” by Adam Corbin Fusco

“The Mansion of Bones” by Richard Parks (and many others)

You can also mention a duo from any other fantasy fiction.

Full rules for the signed Chris Willrich The Scroll of Years Twitter giveaway:

BCS will conduct the random drawing from all eligible entries. The signed copy of The Scroll of Years will be mailed to the winner.