Recent Posts
Recent Comments
Categories
“Cherry Blossoms on the River of Souls” in Best SF&F of the Year
Posted in: Awards and Accolades, BCS Authors Elsewhere by Scott H. Andrews 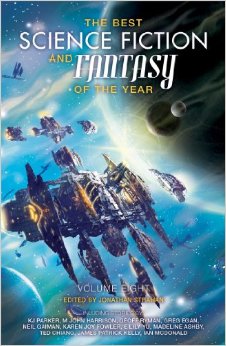 “Cherry Blossoms on the River of Souls,” Richard Parks’s Japanese-flavored ghost story from BCS #131, our Fifth Anniversary Double-Issue, has been named by editor Jonathan Strahan to The Best Science Fiction and Fantasy of the Year, Volume 8.

Congratulations! “Cherry Blossoms” was one of the best-reviewed BCS stories of the 2013, earning praise from both Locus online and Locus paper edition.

Best SF&F of the Year 8, with that cool cover at left, is due from Solaris Books in April.