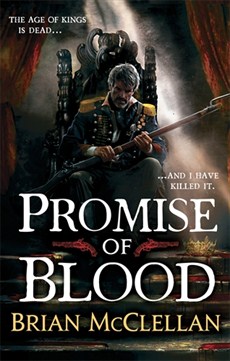 Brian McClellan’s Powder Mage Trilogy, a “flintlock fantasy” epic series, combines post-Industrial Revolution technology with magic. The first book, Promise of Blood, was released last year, and the second, The Crimson Campaign, is due in May.

“The Face in the Window,” Brian’s story in BCS #140, is set in the Powder Mage world and follows a major character from the novels.

In conjunction with “The Face in the Window,” BCS is giving away copies of the UK paperback of Promise of Blood, signed and personalized by Brian!

The last giveaway will take place Wed. Feb. 19 on the BCS Twitter feed @BCSmagazine. It will run from 2 PM EST until 6 PM EST.

To enter, all you need to do is tweet what your favorite non-medieval setting epic fantasy novel is. That will enter you in a random drawing for the book.

You can interpret “non-medieval setting” however you like. You do need to be a resident of the US, for publisher reasons (our apologies). For the Full Rules, click on ‘Show Hidden Text’ at the end of this post.

BCS will conduct the random drawing from all eligible entries. The signed copy of Promise of Blood will be mailed to the winner.