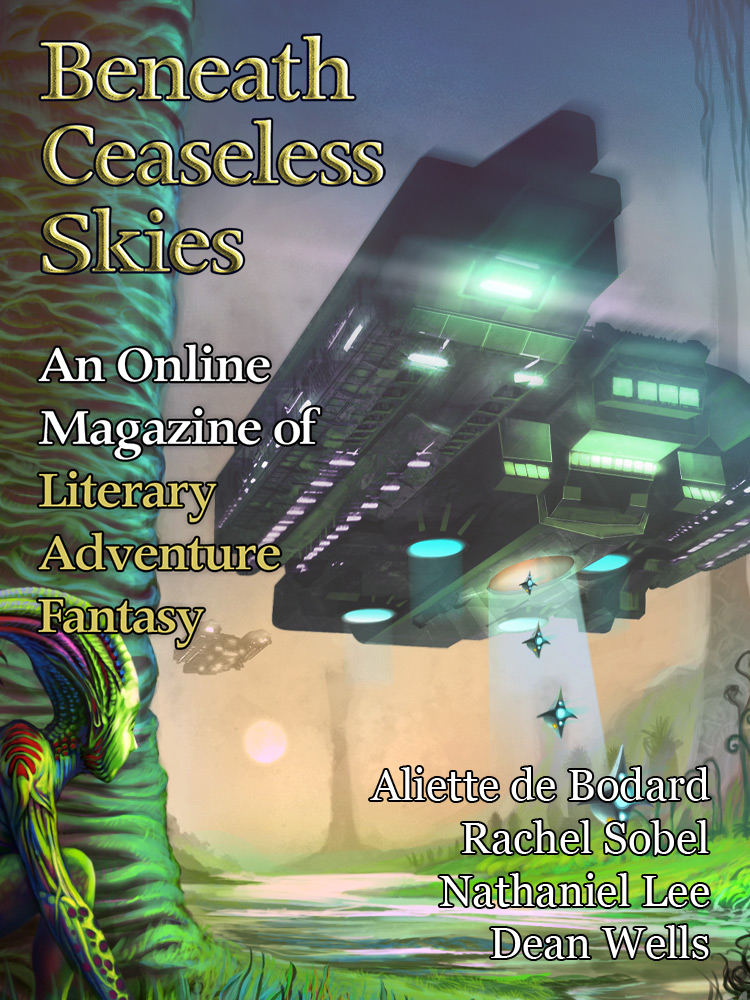 BCS #142 is out, a special double-issue kicking off BCS Science-Fantasy Month 2!

Aliette de Bodard (“Memories in Bronze, Feathers, and Blood” in BCS #45 and podcast BCS 041, and three others) returns to BCS with “The Breath of War,” a new story in the futuristic spacefaring age of her Xuya world. Rachel Sobel offers “The River Does Not Run,” a tale of personal questing through a strange ruined landscape.

The two bonus stories, releasing on the website next Thursday, are both by returning BCS authors: “Stonebones” by Nathaniel Lee, a tale of a forthright young science-fantasy Knight setting out on her own, and “The Goddess Deception, Pt. 1” by Dean Wells, the first half of a novella set in a future spacefaring age of the world of his BCS steampunk stories (“Evensong, Having Been Answered;” “To the Gods of Time and Engines, a Gift”).  The full issue is available now on ebook at Kindle and Weightless Books.

The BCS Audio Fiction Podcast episode is BCS 121: The Breath of War by Aliette de Bodard, guest-narrated by podcaster, novelist, and BCS author Tina Connolly, who has guest-narrated past BCS podcast episodes including BCS 091: Cursed Motives by Marissa Lingen and BCS 084: One Ear Back by Tina herself.

The ‘From the Archives’ story with BCS #142 is “Scry” by Anne Ivy from BCS #90, part of our first BCS Science-Fantasy Month in 2012, a tale of family relationships and the fate and free will of seeing their future. The special science-fantasy cover art is the gorgeous “Sojourn” by Philippine artist Ferdinand Dumago Ladera.

BCS Science-Fantasy Month 2 will continue next week, with the website release of the two bonus stories, and in two weeks with BCS #143, featuring Yoon Ha Lee (whose story “The Book of Locked Doors” was in our previous Science-Fantasy Month), Seth Dickinson (“Worth of Crows” in BCS #104, among others), the conclusion of “The Goddess Deception,” a bonus podcast, and more!

Read Comments on this Post (No Comments Yet)
Share this
Comments & Scrivenings
Leave a comment on “BCS #142, Science-Fantasy Month 2 – de Bodard, Sobel, Lee, Wells, and More”