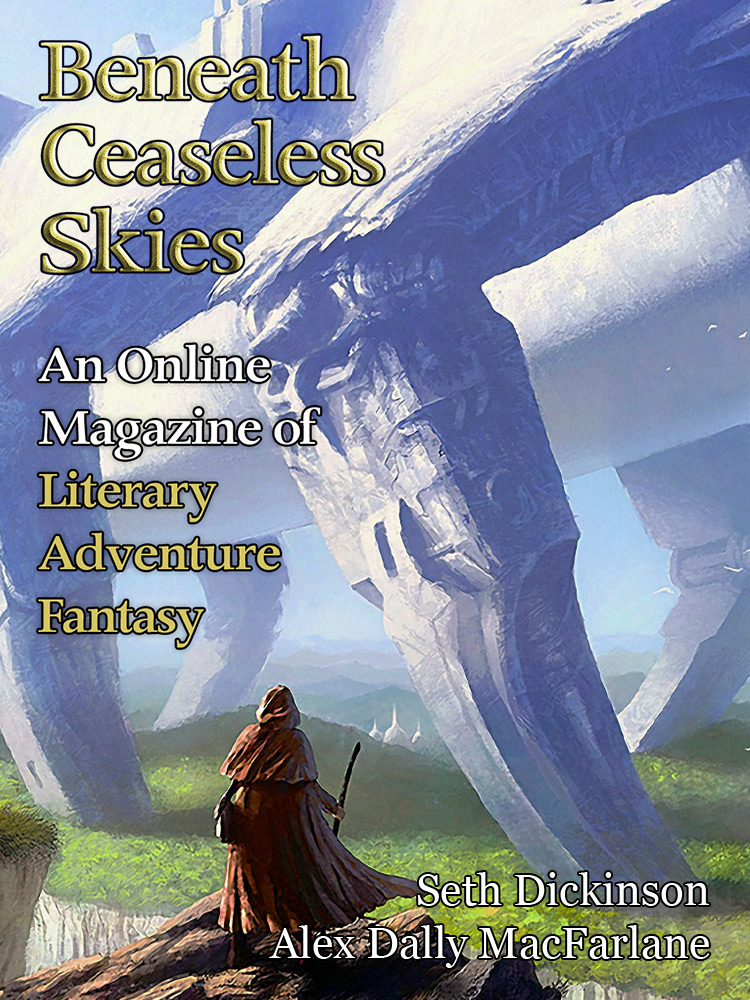 BCS #145 is out today, featuring two returning BCS authors, a guest-narrated podcast, and a giveaway for an audio book!

Seth Dickinson (“Sekhmet Hunts the Dying Gnosis: A Computation” in BCS #143 and podcast BCS 123, “Worth of Crows” in BCS #104 and podcast BCS 090, and one other) offers a new fantasy, “Our Fire, Given Freely,” featuring a puissant steppe warrior clashing with those under her charge.

Alex Dally MacFarlane (“Singing Like a Hundred Dug-up Bones” in BCS #121 and podcast BCS 104; “Fox Bones. Many Uses.” in BCS #99) contributes “Women in Sandstone,” a sinuous narrative of a general, her mother and her daughter, and the cadre of ageless winds that have witnessed eons in this land.

The BCS Audio Fiction Podcast episode is BCS 125: At the Edge of the Sea by Raphael Ordoñez (“Misbegotten” in BCS #113 and podcast BCS 097, and one other), his tale of solitude and its strangeness from BCS #144.  It’s guest-narrated by Michael J. Deluca, who also narrated  “Misbegotten” and Seth Dickinson’s “Worth of Crows,” among others.

In celebration of the milestone of the 125th episode of the BCS Audio Fiction Podcast, we’re giving away an audio book of BCS author Saladin Ahmed’s (“Where Virtue Lives” in BCS #15) novel Throne of the Crescent Moon. Enter the giveaway here.

The ‘From the Archives’ story with BCS #145 is “The Death of Roach” by Spencer Ellsworth, from BCS #85,  a story of bleak desert wandering and self-discovery not unlike “Women in Sandstone.”