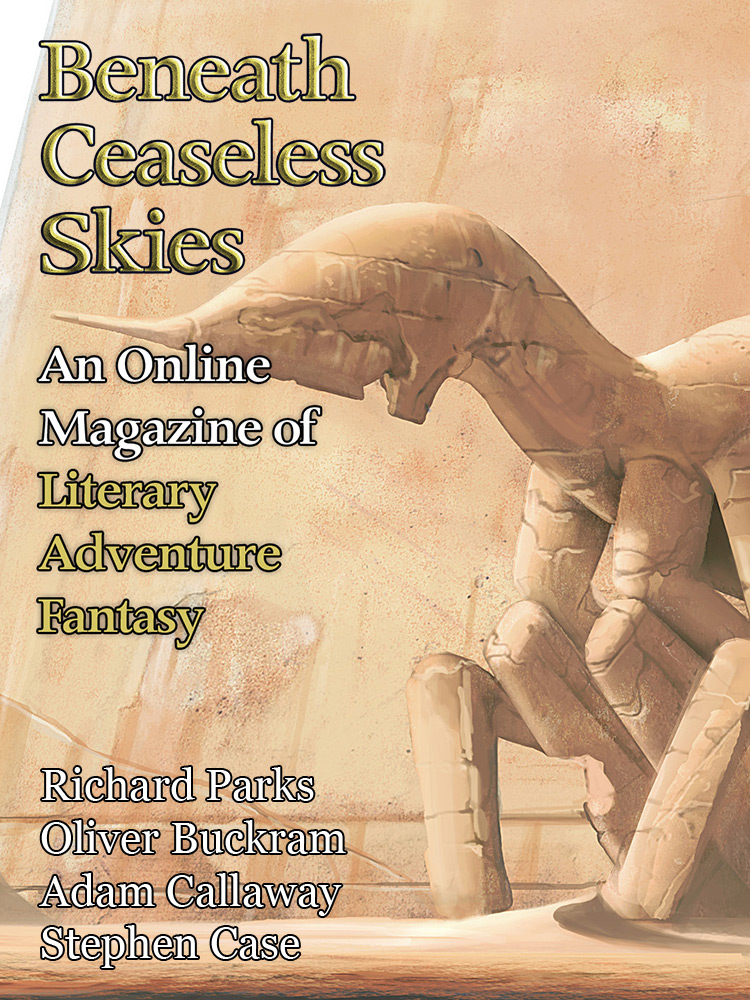 It includes “The Manor of Lost Time,” a story of demonic imprisonment by Richard Parks, author of the Lord Yamada tales, and “The Inked Many,” a novelette by Adam Callaway set in the Ars Lacuna world of strange ink and writings that has been featured in his many other BCS stories.

Plus “The Black Waters of Lethe,” a short piece of maddening isolation by Oliver Buckram, and “The Unborn God,” a tale of strange discovery and quest by returning BCS author Stephen Case.

The Callaway and Case stories won’t be released on the website until next week, but they are available now in the ebook, on Kindle and at WeightlessBooks.com.

The BCS Audio Fiction Podcast episode is BCS 130: The Black Waters of Lethe, Oliver Buckram’s short tale of maddening isolation, guest-narrated by Norm Sherman, Editor and Producer of The Drabblecast, a three-time winner of the Parsec Award for Best Magazine Podcast.

The ‘From the Archives’ story is “In the Palace of the Jade Lion” by Richard Parks, another non-Lord Yamada tale of his, from BCS #100, another milestone issue. It was named to the Locus Recommended Reading list for 2012.

We are also giving away a gorgeous hardback copy of Brandon Sanderson’s Hugo Award-winning novella The Emperor’s Soul, signed to BCS by Mr. Sanderson. Visit this giveaway post to enter.

Our 150th Issue Ebook Sale continues at Weightless Books. They now have every single past issue of BCS, from #1 to #150, including many that aren’t available anywhere else. You can buy them as single issues, but for this sale we’re also offering them as bundles of 25 issues, for only $9.99.

In 150 issues of BCS, nearly six years, we’ve published 310 stories and 130 audio fiction podcasts. And there’s more to come! Including the premiere of our brand-new second podcast next week! Thanks so much for reading and listening.

Read Comments on this Post (1 Comment)
Share this
Comments & Scrivenings
Leave a comment on “BCS #150 – Parks, Callaway, Buckram, Guest Podcast, Sanderson Giveaway”
Beneath Ceaseless Skies #150 | Richard Parks
[…] Andrews has published his 150th issue of Beneath Ceaseless Skies today, including my own “The Manor of Lost Time.”   This from Scott’s own […]