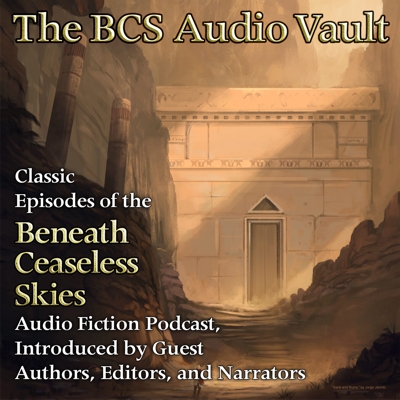 BCS is launching a new podcast: The BCS Audio Vault!

The premiere episode of the BCS Audio Vault is Chris Willrich’s story “How the Wicker Knight Would Not Move” from BCS #99 back in July 2012.

It’s introduced by Hugo Award-winning editor of Pyr books and middle-grade fantasy author Lou Anders.  Lou first encountered Chris’s fiction here in BCS and liked it so much that he acquired three of Chris’s adventure fantasy novels for Pyr Books. His perspective on Chris’s work, and on “How the Wicker Knight Would Not Move” in particular, makes for a fascinating introduction to the story.

In conjunction with this premiere episode of The BCS Audio Vault, we’re giving away a signed copy of Chris’s new second novel, The Silk Map, set in the same world as “How the Wicker Knight Would Not Move” and featuring his characters Gaunt and Bone (also in his story “The Sword of Loving Kindness” in BCS #1).

Enter the giveaway here.  And to hear classic BCS audio fiction introduced by great guests, check out The BCS Audio Vault, or subscribe to its RSS feed, or look for it on iTunes.