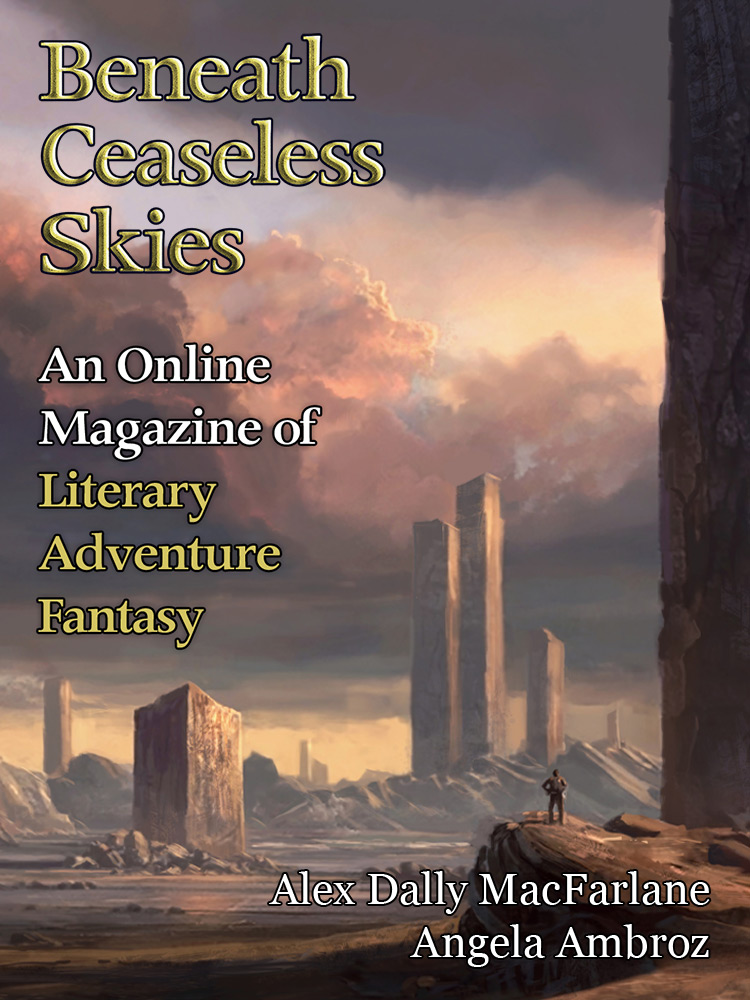 BCS #156 is out today, featuring new stories, a guest-narrated podcast, Audio Vault and From the Archives stories, and a giveaway for a signed short story collection!

Alex Dally MacFarlane (“Women in Sandstone” in BCS #145, “Singing Like a Hundred Dug-up Bones” in BCS #121 & podcast BCS 104 & our new ebook anthology Best of BCS Year Five) offers “Written on the Hides of Foxes,” a tale of finding oneself after physical and social ostracization. Angela Ambroz contributes “The Good Deaths, Part II,” a self-standing piece about a character likewise ostracized, in the name of personal conviction, and trying to find her way.

BCS 134: The Good Deaths, Part II is also the BCS Audio Fiction Podcast episode for Issue #156. Given a great narration by BCS author, podcast narrator, and award-winning podcaster Tina Connolly, who has narrated past BCS Audio Fiction Podcast episodes such as BCS 121: The Breath of War by Aliette de Bodard, BCS 091: Cursed Motives by Marissa Lingen, and BCS 128: The Use and the Need by M. Bennardo (which coincidentally has a similar point of historical inspiration as The Good Deaths, Part II).

The ‘From the Archives’ story, “Pilgrims” by Ann Chatham from BCS #141, features a character likewise isolated in the name of personal conviction and trying to find her way.

Our new podcast, The BCS Audio Vault, this week features BCS Audio Vault 006: The Penitent by M. Bennardo, a stark tale of visceral isolation from BCS #123 in June 2013, which also appears in our new ebook anthology Best of BCS Year Five.

We are also giving away a signed copy of BCS author Helen Marshall’s (“Crossroads and Gateways” in BCS #151) new short fiction collection, Gifts for the One Who Comes After, from Chizine Press. Visit this giveaway post to enter. But hurry; the giveaway ends Tuesday Sept. 23!