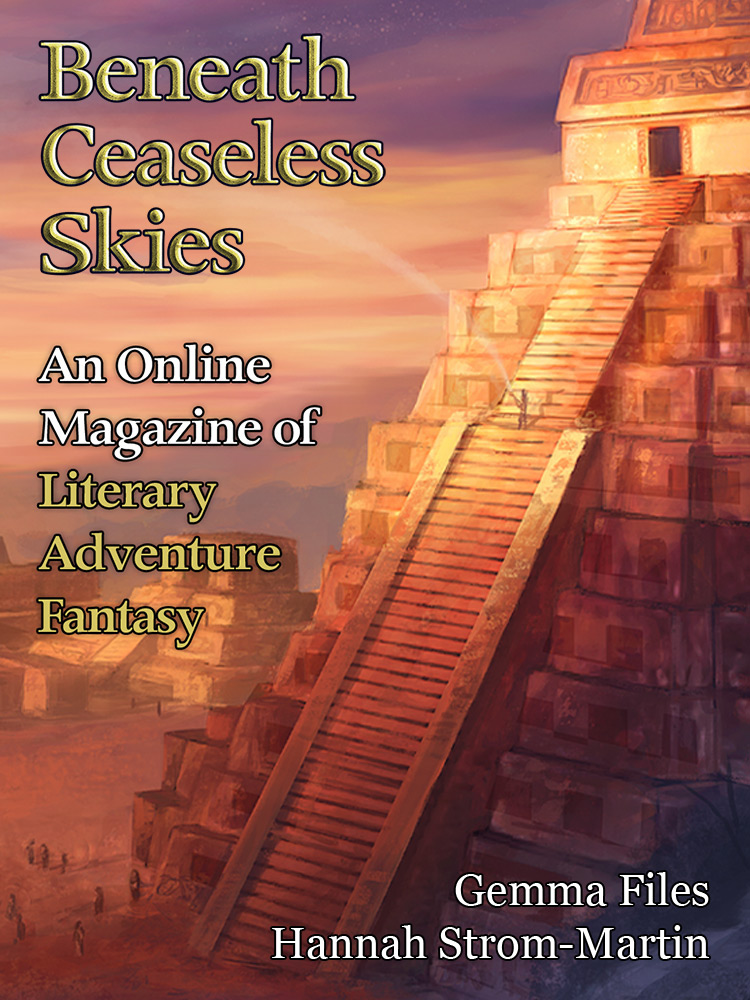 BCS #159 is now out, featuring dark stories by two returning BCS authors, a guest-narrated podcast, Audio Vault and From the Archives stories, and a giveaway for a huge fantasy anthology.

Gemma Files (“A Feast for Dust” in BCS #132 and podcast BCS 114) returns to BCS with “Drawn Up From Deep Places,” a new novelette of her haunted sea captain Jerusalem Parry, who also appeared in “Two Captains” in BCS #125. Hannah Strom-Martin (“Now Ix, He Was a Lover” in BCS #130) offers “The Burned Man,” a darkly acute fable of life choices and their consequences.

BCS 138: The Rugmaker’s Lovers by Brynn MacNab is the BCS Audio Fiction Podcast episode, a dark fable from BCS #158. It’s guest-narrated by Michael J. DeLuca, ofttimes BCS podcast narrator and author of another dark fable, “The Nine-Tailed Cat” from BCS #70 and podcast BCS 062.

The ‘From the Archives’ story is “In the Gardens of the Night” by Siobhan Carroll, from BCS #74, a tale of palace intrigue and acute choices not unlike “The Burned Man,” but from a different perspective.

Our new podcast, The BCS Audio Vault, this week features BCS Audio Vault 008: The Suffering Gallery by Matthew Kressel, a tale of a powerful demon clashing with her underling and the human who battles her to rescue his son. It’s introduced by the author, explaining the evolution of the setting (also featured in “Pheth’s Aviary” in BCS #133) and the story’s exploration of the demons’ and humans’ personal relationships.

We are also giving away a signed copy of the new anthology The Mammoth Book of Warriors and Wizardry, which features four stories from BCS and nine other stories by BCS authors. Visit this giveaway post to enter. But hurry; the giveaway ends Wednesday Nov. 5!

Next issue, look for lighter tales, including a strange one from returning BCS author M. Bennardo (“The Penitent” in BCS #122,“After Compline, Silence Falls” in BCS #107, and others)...