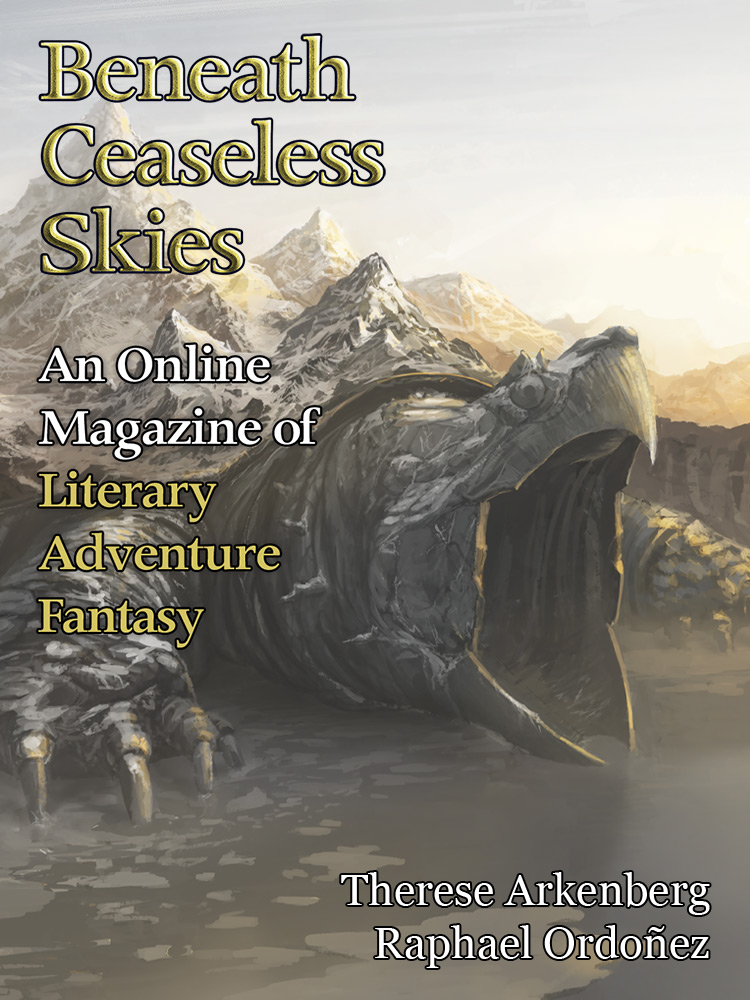 BCS #165 is out today, featuring two returning BCS authors, a guest-narrated podcast, and a classic BCS story emerging from The BCS Audio Vault.

Therese Arkenberg returns to BCS with “For Lost Time,” another story in the long and fraught journey of her protagonists from “The Storms in Arisbat” in BCS #110 (given a Recommended rating by Locus online).

Raphael Ordoñez (“At the Edge of the Sea” in BCS #144 and podcast BCS 125,  “Misbegotten” in BCS #113 and podcast BCS 097 (given a Recommended rating by Locus online and named to the 2013 Locus Recommended Reading List) returns to BCS with “Day of the Dragonfly,” a tale epic, endearing, and strange.

The BCS Audio Fiction Podcast episode is BCS 142: Everything Beneath You by Bonnie Jo Stufflebeam, a lyrical tale of journey both mythic and personal. It’s guest-narrated by Tina Connolly, BCS author, podcast narrator (including BCS 134: The Good Deaths, Part II by Angela Ambroz and BCS 121: The Breath of War by Aliette de Bodard), and Parsec Award-winner as the director of the podcast Toasted Cake.

The BCS Audio Vault episode with BCS #165 is BCS Audio Vault 014: Between Shifting Skin and Certainty by Justin Howe, a gritty tale of sword & sorcery aesthetics and mood combined with political intrigue and a fluid sense of self. It’s introduced by the author, detailing the 19th Century female adventurer’s travel log and the Kurosawa film that inspired facets of the story.

The From the Archives story with BCS #165 is “And Her Eyes Sewn Shut with Unicorn Hair” by Rosamund Hodge from BCS #73, a tale of struggle and quest for a duo of protagonists, not unlike “For Lost Time” or “Day of the Dragonfly.”