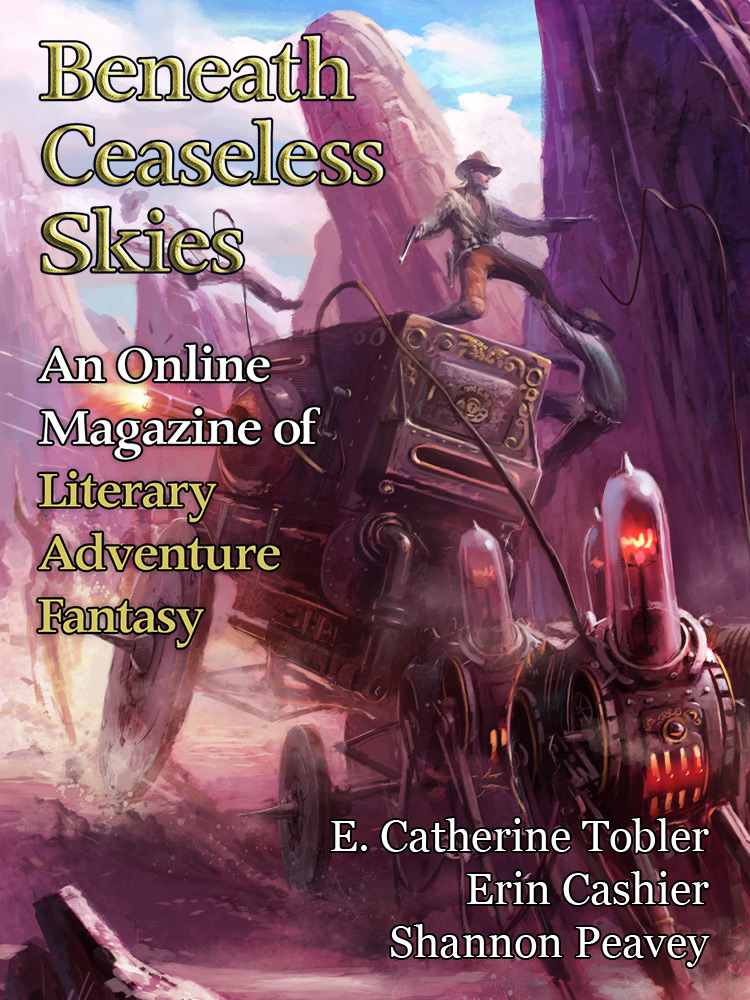 BCS #172 rides into town today, a special Weird Western issue, featuring three Weird Western stories, a podcast, and a new episode of The BCS Audio Vault, all in honor of our new anthology Ceaseless West: Weird Western Stories from Beneath Ceaseless Skies, now available at ebook stores including Amazon, Apple iBooks, and WeightlessBooks.com.

E. Catherine Tobler (“We, As One, Trailing Embers” in BCS #147 and podcast BCS 127, “Artificial Nocturne” in BCS #126, both in her circus world, among others) offers “Splitskin,” another of her strange time-traveling circus stories, this one with a unique west-America feel.

Erin Cashier (“Eighth Eye” in BCS #49 and podcast BCS 043, “The Alchemist’s Feather” in BCS #25 and podcast BCS 023, and“Hangman” in BCS #10, podcast BCS 010, BCS Audio Vault 017,  and the new Ceaseless West anthology) returns to BCS for the first time since 2009 with “Swallowing Silver,” a tale of family homestead tension amid a cursed outside threat.

Shannon Peavey offers “The Snake-Oil Salesman and the Prophet’s Head,” in which the sideshow protagonist is accompanied by his brother’s severed head in a jar.

The BCS Audio Fiction Podcast episode is BCS 149: Swallowing Silver, the Erin Cashier story, rendered in the taut voice of bleak family and a bleak situation.

The From the Archives story with BCS #172 is “The Angel Azrael Delivers Small Mercies” by Peter Darbyshire, from BCS #102 and podcast BCS 087, another tale of his gunslinging fallen angel whose first story appears in Ceaseless West.

All behind the great Weird Western cover art “Bandits Assault a Stagecoach” by Ignacio Bazan Lazcano, which appeared on our cover in Summer 2012 and also on Ceaseless West.

To celebrate the release of Ceaseless West last week, we’re having a BCS ebook sale! Check here or at Weightless Books for details. It ends Tues. May 5!