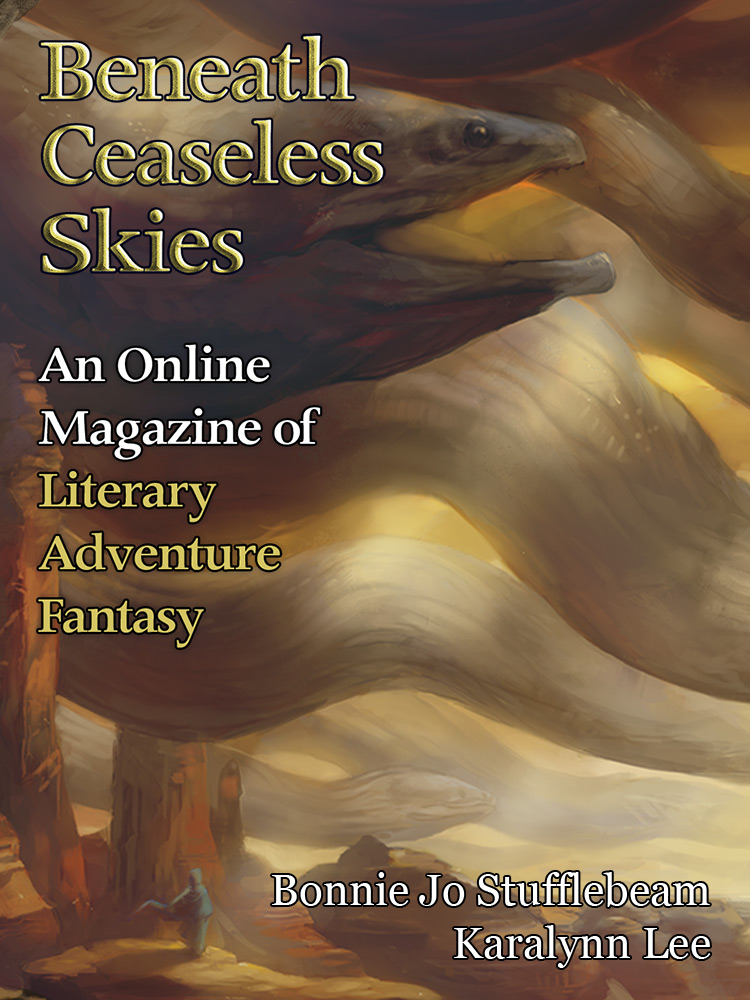 BCS #176 is out, featuring two stories of finding one’s place in the world.

Bonnie Jo Stufflebeam (“Everything Beneath You” in BCS #164 and podcast BCS 142, and another new story forthcoming this fall) returns to BCS with “The Girl with Golden Hair,” a tale of a young woman struggling in her mythical city and on a journey of distance and self.

Karalynn Lee (“Unsilenced” in BCS #105, our Fourth Anniversary Double-Issue, which received a Recommended rating from Locus online) returns to BCS with “Court Bindings,” a short and lyrical piece about court intrigue and personal power.

The BCS Audio Fiction Podcast is BCS 153: The Girl with Golden Hair, Bonnie Jo Stufflebeam’s story of struggle and journey. It’s guest-narrated by Michael J. DeLuca, including BCS 138: The Rugmaker’s Lovers by Brynn MacNab, BCS 125: At the Edge of the Sea by Raphael Ordoñez, BCS 123: Sekhmet Hunts the Dying Gnosis: A Computation by Seth Dickinson, and others.

BCS #176 also features a new episode of the BCS Audio Vault: 019: The Nine-Tailed Cat by Michael J. DeLuca, a short and lyrical tale of personal obsession not unlike “Court Bindings.” It’s introduced by the author, explaining the origin of the story’s setting and the post-colonial resonance of several of its symbols, both those apparent or subtle and more insidious.

Accompanying them From the Archives with BCS #176 is “Pilgrims” by Ann Chatham, BCS #141 and podcast BCS 120, a tale of two travelers on driven missions. All behind another crop of our new cover art: “Migration,” by Hugo Award-winning artist Julie Dillon.