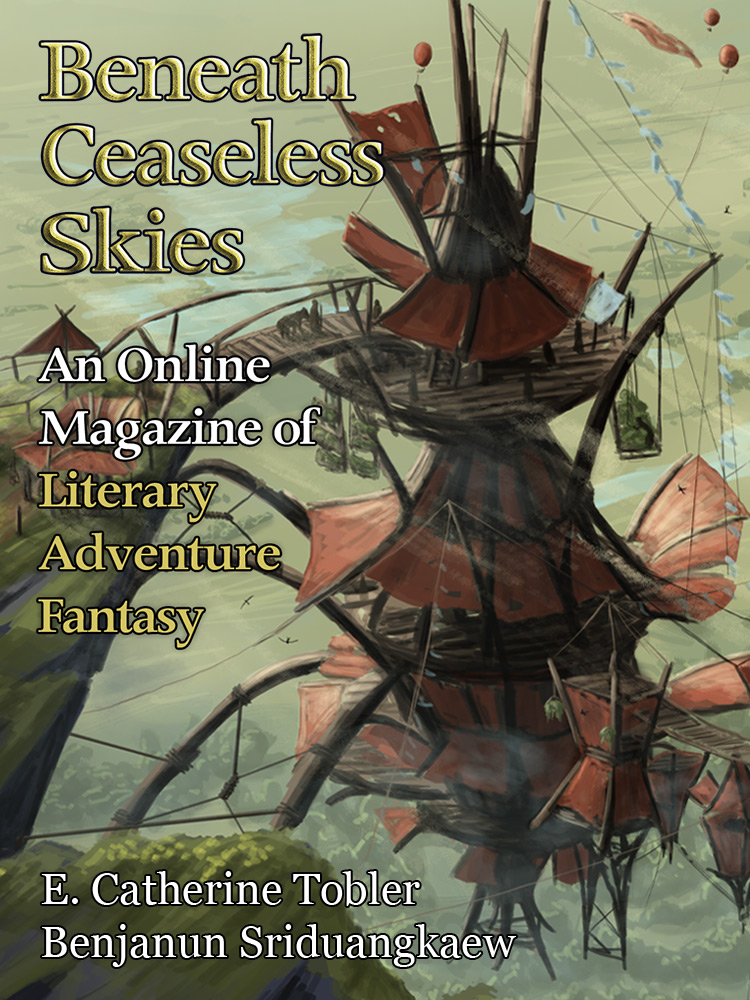 E. Catherine Tobler returns to BCS with “Ebb Stung By the Flow,” another story set in the same traveling circus setting as many of her previous BCS stories (“Cloud Dweller” in BCS #199, “Splitskin” in BCS #172, “We, As One, Trailing Embers” in BCS #147 podcast BCS 127, “Artificial Nocturne” in BCS #126, “Lady Marmalade” in BCS #98), featuring two seminal characters in this sequence’s mythos.

Benjanun Sriduangkaew (“The Insurrectionist and the Empress Who Reigns Over Time” in BCS #178, “Golden Daughter, Stone Wife” in BCS #144, “The Crows Her Dragon’s Gate” in BCS #118) offers “Under She Who Devours Suns,” a tale of relationship and conflict.

The From the Archives story with BCS #204 is “Unearthly Landscape by a Lady” by Rebecca Campbell, from BCS #184 and podcast BCS 161, which was named to the Locus Recommended Reading list and was reprinted in Year’s Best Science Fiction & Fantasy, 2016, edited by Rich Horton.

The BCS Audio Fiction Podcast is on a brief hiatus. In the meantime, peruse our episodes from earlier this year and from 2015, including BCS 150: The Punctuality Machine, Or, A Steampunk Libretto by Bill Powell, a special large-cast reading featuring multiple guest narrators, and BCS 173: The Sweetest Skill by Tony Pi, guest-narrated by John Meagher, a sequel to BCS 133: No Sweeter Art that last year was named a finalist for the Parsec Awards.