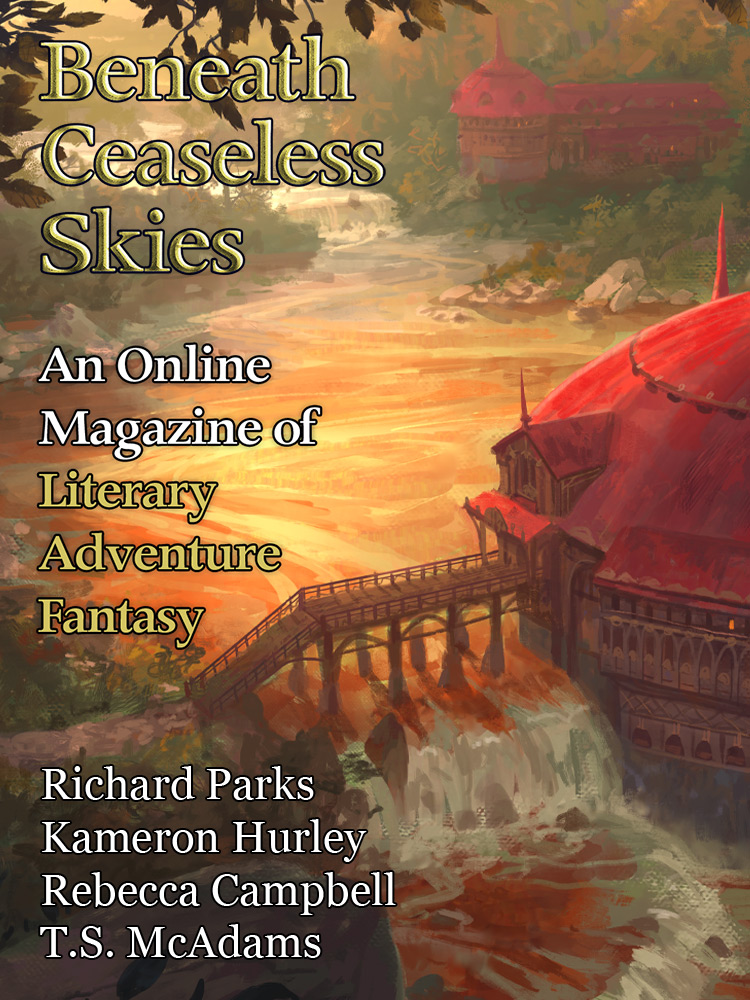 BCS #235, our Ninth Anniversary Double-Issue, is out today!

Richard Parks (a dozen previous stories in BCS, including Lord Yamada tales such as “The Ghost of Shinoda Forest” in BCS #63 and standalone pieces like “In the Palace of the Jade Lion” in BCS #100) continues the new series he began in “In Memory of Jianhong, Snake-Devil” in BCS #226 and podcast BCS 197 with “On the Road to the Hell of Hungry Ghosts,” with the father-daughter ghost hunters and their new nonhuman companion encountering history and the supernatural.

Kameron Hurley (“The Judgment of Gods and Monsters” in BCS #200) returns to BCS with “The Fisherman and the Pig,” another tale of the aftereffects of war, this time on a single person.

Rebecca Campbell (“Unearthly Landscape by a Lady” in BCS #184 and podcast BCS 161) returns to BCS with “The Fall of the Mundaneum,” a likewise engagingly oddly voiced story, about history and isolation and an idiosyncratic archive. T.S. McAdams offers “Grassland,” a story of strange life and community in a strange prairie landscape.

The Hurley and Campbell stories will release on the website on Oct. 5, but the full issue is available now on ebook at Amazon and Weightless Books.

The BCS Audio Fiction Podcast episode is BCS 203: On the Road to the Hell of Hungry Ghosts, the Richard Parks story of the father-daughter ghost hunters encountering a strange new challenge. It’s guest-narrated by Folly Blaine, narrator of past BCS Audio Fiction Podcast episodes including BCS 189: Out of the Woods by Marissa Lingen, BCS 146: Sun, Stone, Spear by Carrie Vaughn, and BCS 197: In Memory of Jianhong, Snake-Devil, the previous story in this series.

The From the Archives story with BCS #235 is “Heaven Thunders The Truth” by K.J. Parker, from BCS #157, our Sixth Anniversary Double-Issue, featuring family and past history not unlike “On the Road to the Hell of Hungry Ghosts.”

In nine (!) years of BCS, we’ve published almost 500 stories and 240 audio fiction podcasts. And there’s more to come! Thank you for reading!