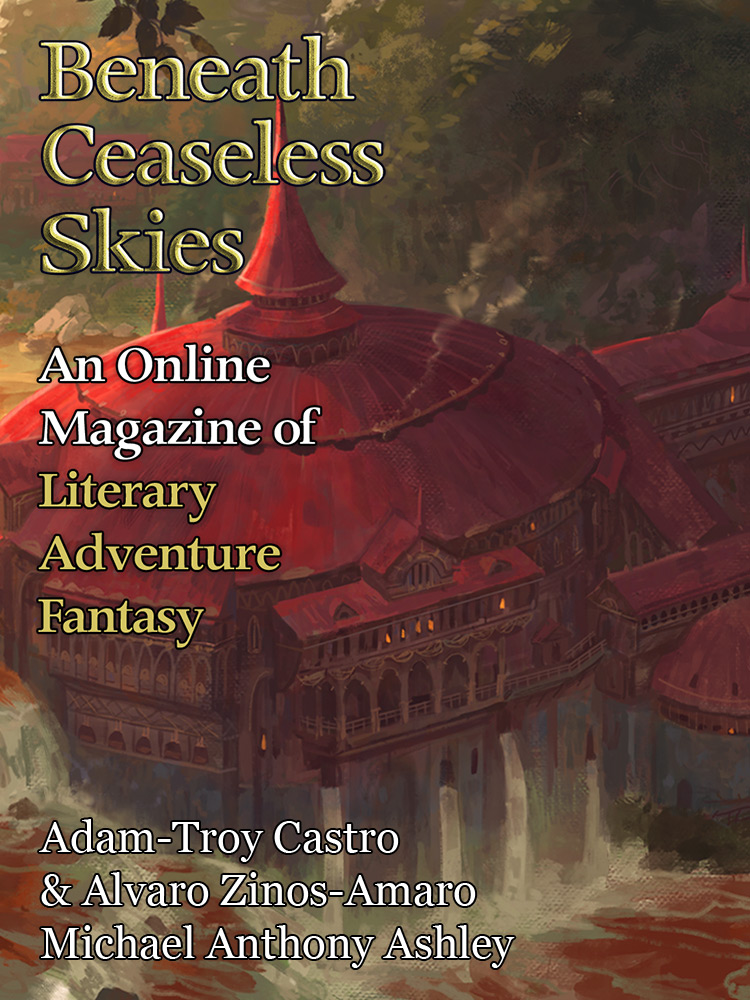 BCS #239 is out today, two days early for the U.S. holiday, featuring tales of beauty and art and life.

Adam-Troy Castro & Alvaro Zinos-Amaro pen “The Mouth of the Oyster,” in which a blind accountant and husband faces the choice of seeing beauty again.

Michael Anthony Ashley (“A Courtship of Beasts” in BCS #209, “Hence the King from Kagehana” in BCS #81, “To Kiss the Granite Choir” in BCS #27) returns to BCS with “Woe and Other Remedies,” a tale of art and depravity and spectacle and their effect.

The BCS Audio Fiction Podcast episode is BCS 207: The Mouth of the Oyster, the Adam-Troy Castro & Alvaro Zinos-Amaro story of seeing beauty and life. Marie Brennan caper. It’s guest-narrated by Michael J. DeLuca, who has narrated a number of past episodes of the BCS Audio Fiction Podcast including BCS 187: Wooden Boxes Lined with the Tongues of Doves by Claire Humphrey, BCS 174: Whale-Oil by Sylvia V. Linsteadt, and BCS 179: Mortal Eyes by Ann Chatham.

From the Archives with BCS #239 is “The Limitless Perspective of Master Peek, or, the Luminescence of Debauchery” by Catherynne M. Valente, from BCS #200 and podcast BCS 178, a tale of sight and beauty and life not unlike Adam-Troy Castro & Alvaro Zinos-Amaro’s “The Mouth of the Oyster.”

All behind a new crop of our cover art for our Ninth Anniversary and early autumn in the Northern Hemisphere: “Riverhome” by Veli Nyström.