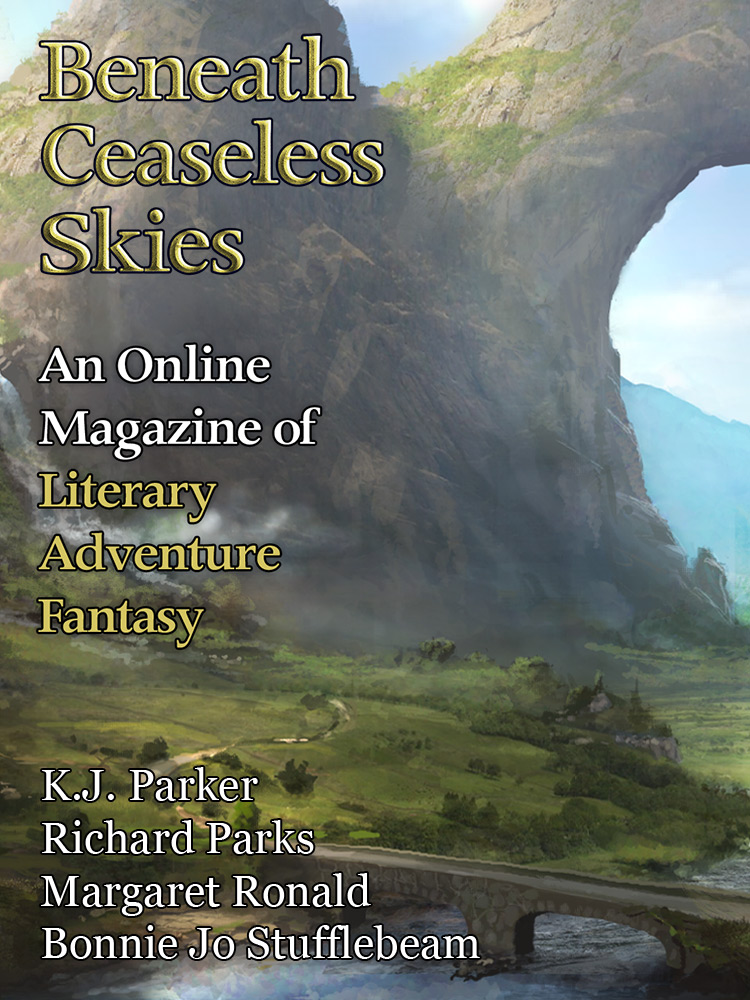 BCS #250 is out today! A special double-issue in celebration of our 250th issue.

K.J. Parker (“Told By An Idiot,” our 400th story, in Issue #192; “Heaven Thunders The Truth” in BCS #157, Six Anniversary Double-Issue) returns to BCS with “The Thought That Counts,” a classically Parker tale of wry erudite first-person, deft plot turns, and profound relationships.

Richard Parks (over a dozen previous stories in BCS, including Lord Yamada tales such as “The Ghost of Shinoda Forest” in BCS #63 and standalone pieces like “In the Palace of the Jade Lion” in BCS #100) continues his new series devil-hunters in an ancient China, begun in “In Memory of Jianhong, Snake-Devil” in BCS #226 and podcast BCS 197 and “On the Road to the Hell of Hungry Ghosts” in BCS #235 and podcast BCS 203, with “An Account of the Madness of the Magistrate, Chengdhu Village.”

Margaret Ronald (“The Governess and the Lobster” in BCS #95, “Salvage” in BCS #77, among many others) returns to BCS with a fourth story in her series of war-veteran Arthur Swift and the kobold detective Mieni, “Silence in Blue Glass,” set at an earlier reunion of theirs.

Bonne Jo Stufflebeam, whose most recent BCS story, “The Orangery,” was a finalist for the Nebula Awards, returns to BCS with “Angry Kings,” a tale of fables and family and expectations.

The Parks and Ronald stories won’t go live on the website until next week, but they are available right now in the ebook of BCS #250, at Weightless Books and Kindle.

The first BCS Audio Fiction Podcast episode for BCS #250 is BCS 216: The Thought That Counts, K.J. Parker’s tale of a wry first-person narrator negotiating obstacles legal and lethal. It’s guest-narrated by Heath Miller, who narrated BCS 178: The Limitless Perspective of Master Peek, or, the Luminescence of Debauchery by Catherynne M. Valente from BCS #200.

The bonus BCS Audio Fiction Podcast episode, out next week, is BCS 217: An Account of the Madness of the Magistrate, Chengdhu Village, the latest tale in Richard Parks’s new series. It’s guest-narrated by Folly Blaine, narrator of many past episodes of the BCS Audio Fiction Podcast, including the previous two Parks tales in this series: BCS 203: On the Road to the Hell of Hungry Ghosts and BCS 197: In Memory of Jianhong, Snake-Devil.

The From the Archives story with BCS #250 is “The Limitless Perspective of Master Peek, or, the Luminescence of Debauchery” by Catherynne M. Valente, from BCS #200, a sweeping tale of a richly voiced first-person narrator and their exploits and relationships via crafting magical glass eyes.

We’re celebrating BCS #250 with a BCS Ebook Subscription Drive! To see how subscribers get issues early, what great authors are forthcoming in BCS, and how you can help us reach our goals of raising our word-count limit, visit Weightless Books.

All behind new cover art for BCS #250 and beyond: “Legendary Passage” by Jereme Peabody.