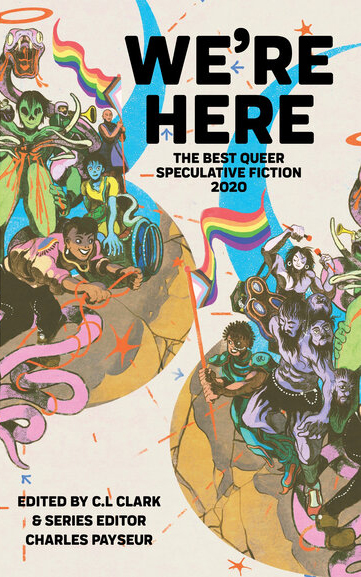 To celebrate the release of the new anthology We’re Here: The Best Queer Speculative Fiction 2020 (Neon Hemlock), edited by BCS authors C.L. Clark and series editor Charles Payseur, BCS is giving away a copy of the anthology.

We’re Here contains sixteen stories of science fiction, fantasy, and horror that feature queer characters and themes, pulled from a diverse assortment of short fiction publications. It includes “To Balance the Weight of Khalem” by R.B. Lemberg, which appeared in BCS  #300.

This giveaway will take place Thurs. Aug. 19 on the BCS Twitter feed @BCSmagazine. It will run from 2 PM EST until 5 PM EST.

To enter the giveaway, all you need to do is tweet what your favorite BCS story is that has queer main character(s) or that features queer characters or themes. However you choose to define it; by any author, in any issue of BCS.

To get you started, here are some stories from past issues of BCS that could be said to have queer main character(s) or feature queer themes:

“The Colors of Sand” by Anna Winterstein, BCS #326

“Every Tiny Tooth and Claw (or: Letters from the First Month of the New Directorate)” by Marissa Lingen, BCS #295 and podcast BCS 251

“The Lingering Weight of Estrian Steel” by Rajan Khanna, BCS #334

“Bearslayer and the Black Knight” by Tom Crosshill, BCS #92 and podcast BCS 080

“Requiem for the Unchained” by Cae Hawksmoor, BCS #217

BCS will conduct the random drawing from all eligible entries. The copy of We’re Here will be mailed to the winner.