A Sin for Freedom
Eboni J. Dunbar
And what was I? The only difference between us was that I had repented.
What the Mountain Takes, What the Journey Offers
Jae Steinbacher
When my lover gets the Burning, I prepare to go to the Binding Place, where the mountain meets the sea. Even in her delirium, she smells the offering meal cooking and sees my half-full pack. She begs me not to go. It’s a journey lovers and pilgrims take—to exchange vows or to petition Mother. The paths to the mountain shift with their travelers’ intentions, and we were much younger when we traveled there to be wed. I squeeze her hand. “I can’t stay and watch you fade.” There’s only one certain cure for the Burning. If I don’t go, Menrie...  Read more »
Recent Comments
Ignacio Bazan Lazcano
Size / Zoom 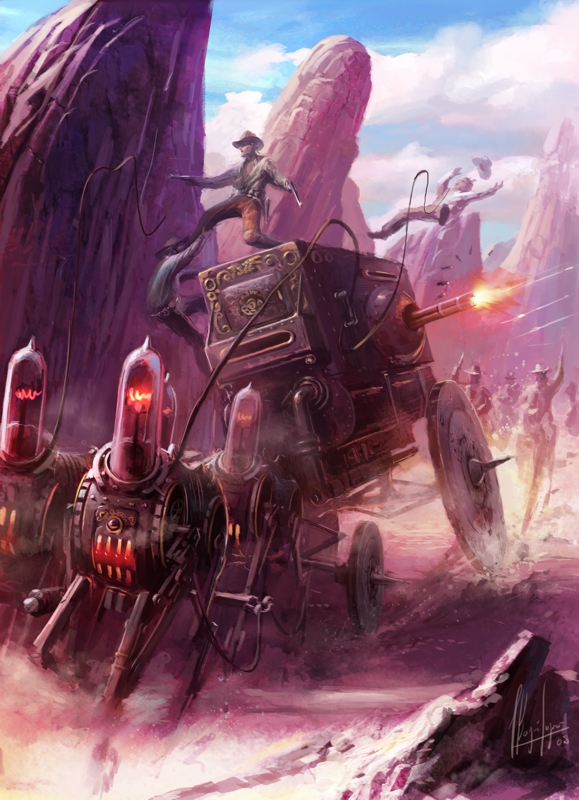 Ignacio Bazán Lazcano was born in Buenos Aires.  A conceptual artist and illustrator, he studied advertising and has worked for over ten years in the entertainment industry.

He was one of the pioneers in the video games field in Argentina and was part of the first home-played game in 1997 called “Falklands 2032.” He has worked for major companies around the world (Sabarasa, NGD, Global Fun, Gameloft, Time Gate) on numerous titles for PS3, XBOX, and PC (Section 8, Section 8 Prejudice, Aliens: Colonial Marines). He has authored publications in renowned journals and books, such as Digital Painting Techniques, 2dartist Magazine, 3DTotal, and Digital Art Masters, and has worked on card games (Star Wars, Lord of the Rings, Warhammer, Call of Cthulhu) and advertising campaigns.

In addition to digital work, Ignacio is a fervent admirer of traditional drawing and painting, and he teaches private lessons. View more of his artwork online at deviantArt.com.