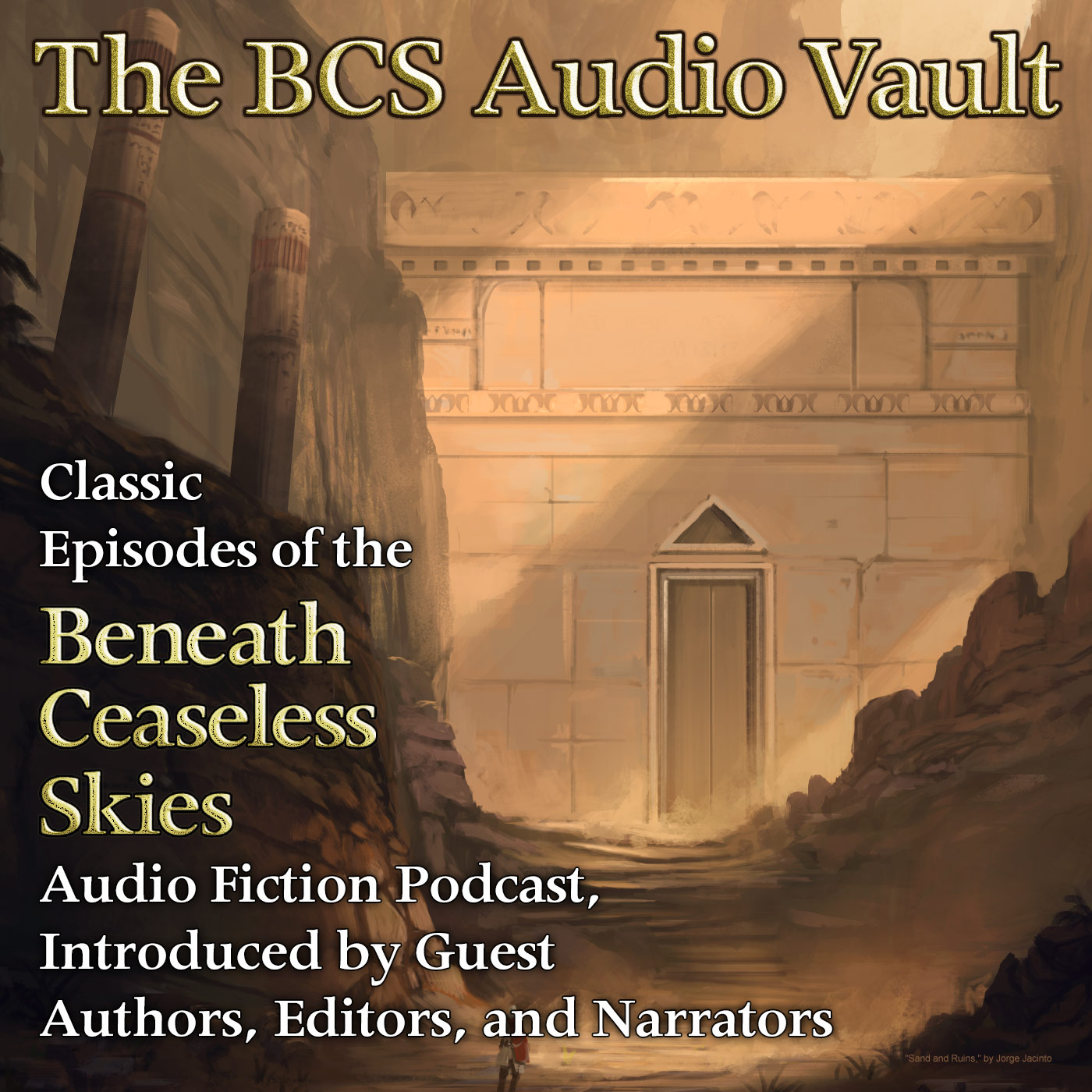 Out today is a new episode of our new podcast, The BCS Audio Vault: 003: Haxan by Kenneth Mark Hoover.

BCS Audio Vault 003: Haxan by Kenneth Mark Hoover features the author introducing his Weird Western story from BCS #13 back in 2009.

A second story in the same series, “High Moon,” later appeared in BCS #32, and CZP/Harper Collins just last month published Mr. Hoover’s novel set in this series, also titled Haxan. A second novel will be out in 2015.

In Mr. Hoover’s introduction, he discusses the ethos behind the protagonist of the story and the novel, US Marshall John Marwood, and his eternal struggle and burden.

Out today is a new episode of our new podcast, The BCS Audio Vault: 002: One Ear Back by Tina Connolly.

The BCS Audio Vault showcases past stories from our two-time Parsec Award-finalist BCS Audio Fiction Podcast, each introduced by a special guest author, editor or narrator.

BCS Audio Vault 002: One Ear Back by Tina Connolly features the author introducing her story from BCS #97 back in 2012.

She also narrated the podcast reading, and in her introduction, she discusses how “One Ear Back” was inspired by an Icelandic folk tale and the life questions it raised, and by one particularly expressive cat.

Check out BCS Audio Vault 002: One Ear Back to hear Tina Connolly’s fascinating comments on her story and hear her narration of it.

To hear more episodes every fortnight, which will include stories by Marie Brennan, David Tallerman, and Seth Dickinson and introductions by Marie Brennan, Rajan Khanna, and Lou Anders, subscribe to The BCS Audio Vault via RSS feed

BCS is launching a new podcast: The BCS Audio Vault!

The premiere episode of the BCS Audio Vault is Chris Willrich’s story “How the Wicker Knight Would Not Move” from BCS #99 back in July 2012.

It’s introduced by Hugo Award-winning editor of Pyr books and middle-grade fantasy author Lou Anders.  Lou first encountered Chris’s fiction here in BCS and liked it so much that he acquired three of Chris’s adventure fantasy novels for Pyr Books. His perspective on Chris’s work, and on “How the Wicker Knight Would Not Move” in particular, makes for a fascinating introduction to the story.

In conjunction with this premiere episode of The BCS Audio Vault, we’re giving away a signed copy of Chris’s new second novel, The Silk Map, set in the same world as “How the Wicker Knight Would Not Move” and featuring his characters Gaunt and Bone (also in his story “The Sword of Loving Kindness” in BCS #1).

Enter the giveaway here.  And to hear classic BCS audio fiction introduced by great guests, check out The BCS Audio Vault, or subscribe to its RSS feed, or look for it on iTunes.

Leave a Comment »
Epic BCS
Posted in: About BCS, From the Archives by Scott H. Andrews

Often fantasy short fiction readers, and writers, turn up their noses and groan at these classic elements of fantasy fiction.  But these elements have a powerful and endearing resonance with millions of readers, TV viewers, RPG players, and gamers.

And they can still be written grippingly well in fantasy fiction.  George R.R. Martin’s Ice and Fire novels feature many common fantasy elements, but he does them with equal focus on the characters as nuanced, flawed, conflicted real people.

At BCS, we favor literary approaches on classic elements, such as a focus on the characters, but the dragons or knights or thieves are still there. Here are a few past BCS stories that feature classic fantasy elements:

“The Stone Oaks” by Stephen Case

“The Giants of Galtares” by Sue Burke

“Bearslayer and the Black Knight” by Tom Crosshill

“Beyond the Shrinking World” by Nathaniel Katz

“The Sword of Loving Kindness, Pt. I” by Chris Willrich

“Thieves of Silence” by Holly Phillips

“To Go Home to Leal” by Susan Forest

“Walking Out” by Harry R. Campion

“In the Gardens of the Night” by Siobhan Carroll

‘Epic’ feel or flavor (war, politics, intrigue, nations and hearts in the balance):

“To Kiss the Granite Choir” by Michael Anthony Ashley

“The Traitor Baru Cormorant, Her Field-General, and Their Wounds” by Seth Dickinson

“Silk and Shadow” by Tony Pi

“Of Shifting Skin and Certainty” by Justin Howe

“From the Spices of Sanandira” by Bradley P. Beaulieu

Elves (yes, there have been BCS stories that feature elves!):

“Now Ix, He Was a Lover” by Hannah Strom-Martin 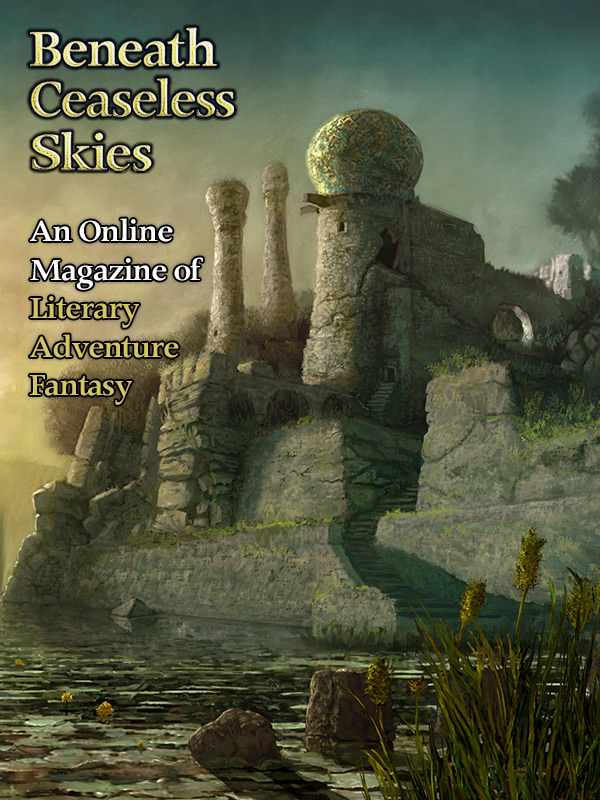 Like “The Clay Farima” by Henry Szabranski in BCS #128, its protagonist, left with one parent and only memories of the other, strives to find answers and meaning along with the parent.

James Lecky’s other BCS story, “And Other Such Delights” in BCS #42, is different but just as vivid and impactful. 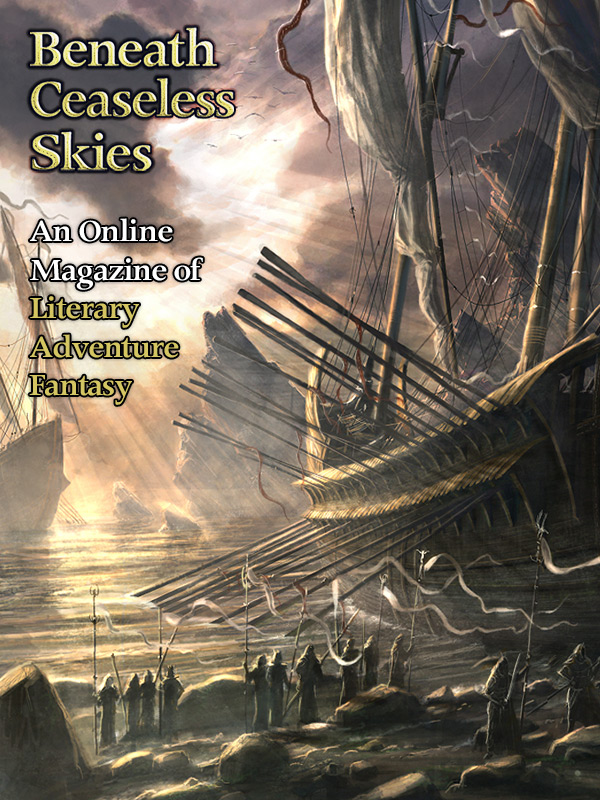 BCS #127 is “The Gardens of Landler Abbey” by multiple-time BCS author Megan Arkenberg, from BCS #83.

Alongside “The Study of Monstrosities” by Greg Kurzawa and “The Crooked Mile” by Dan Rabarts, it comments on the nature of monsters, both real and human (which may be the realest of all).

Also look for our guest-narrated audio podcast version of “The Study of Monstrosities,” coming next week with BCS #128.

It has a similar tone as “Else This, Nothing Ever Grows” by Sylvia Linsteadt, with a protagonist on a lush journey among strange characters and demigods in a search involving love and personal identity. The realms are different, more of a fantasy realm instead of a Pacific Northwest sort of forest, but the journeys are not unlike.

(If you haven’t noticed the From the Archives story listings, they are in the RSS feed for New Issues. Every BCS issue listing there has a ‘From the Archives’ story appended to it: an older story from a past issue, which shares a theme or style or character or setting with one or both of the stories in the current issue.) 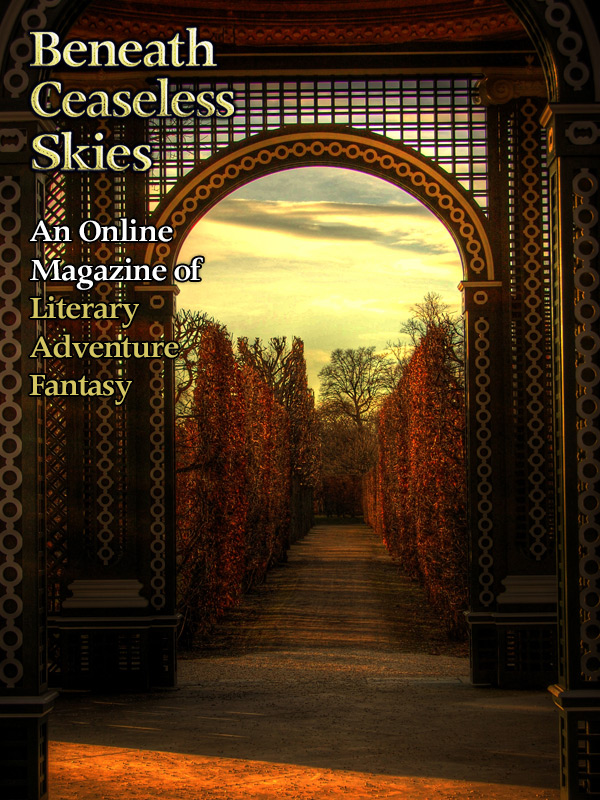 It has a similar tone as “The Girl Who Welcomed Death to Svalgearyen” by Barbara A. Barnett in BCS #124, beyond just the surface similarity in the title. Both deal in fable-like yet still tactile and vivid tones with young characters facing challenges of family and their place in the world.  “The Girl Who Tasted the Sea” doesn’t encounter any Death, but what she faces is just as powerful.

(If you haven’t noticed the From the Archives story listings, they are in the RSS feed for New Issues.  Every BCS issue listing there has a ‘From the Archives’ story appended to it: an older story from a past issue, which shares a theme or style or character or setting with one or both of the stories in the current issue.)