BCS #105, our Fourth Anniversary Double-Issue, is out today!

It includes a new Lord Yamada novelette by Richard Parks, both of whom have been in BCS many times before, alongside a story by Marissa Lingen, another previous BCS author, and stories by Peta Freestone and Karalynn Lee.

The Lingen and Lee stories won’t be released on the website until next week, but the full double-issue is available now on ebook on Kindle and WeightlessBooks.com.

(Ebook subscribers always get issues before the website release. Subscribe now, or buy our new anthology The Best of BCS, Year Three, and we’ll send you a free BCS anthology.)

BCS #105 also has a podcast of Seth Dickinson’s story “Worth of Crows” from Issue #104, guest-narrated by Michael J. DeLuca, and a giveaway for a signed Daniel Abraham fantasy novel.

In four years of BCS, we’ve published over 210 stories and 90 audio fiction podcasts. Wow! And there’s more to come. Thanks so much for reading!

To celebrate the fourth anniversary of BCS, along with our  Fourth Anniversary Double-Issue and our ebook and subscription sale, we’re giving away a signed copy of Daniel Abraham’s epic fantasy novel The Dragon’s Path.

Mr. Abraham is the author of the Long Price Quartet, a critically acclaimed fantasy series, as well co-author of a space opera series that was a finalist for the Hugo Award. The Dragon’s Path is Book One of his new epic fantasy series The Dagger and the Coin. This copy, a hefty trade paperback of almost 600 pages, is signed by Mr. Abraham for BCS.

To enter the giveaway: leave a comment on any of the four stories in BCS #105, the Fourth Anniversary Double-Issue. (Those four links will take you directly to the comments for the stories.) Your comment will enter you in a random drawing for the book.

This giveaway ends Wed. October 17, at midnight Pacific time has ended. The full rules are below (click “Show hidden text”).

You must leave your comment on any one of the four stories in Issue #105 (“Three Little Foxes,” “Cursed Motives,” “Luck Fish,” “Unsilenced“).
Comments left anywhere else will not enter you in the giveaway.

You must post your comment before midnight PST on Wed. Oct. 17. Any comments posted after that will not be eligible.

Each person will be entered only once in the random drawing (even if you leave more than one comment and/or comment on more than one story).

BCS will conduct the random drawing from all eligible entries and mail the signed collection to the winner.

Coming later this week: a bunch of stuff for the fourth anniversary of BCS!

We hope you enjoy it! 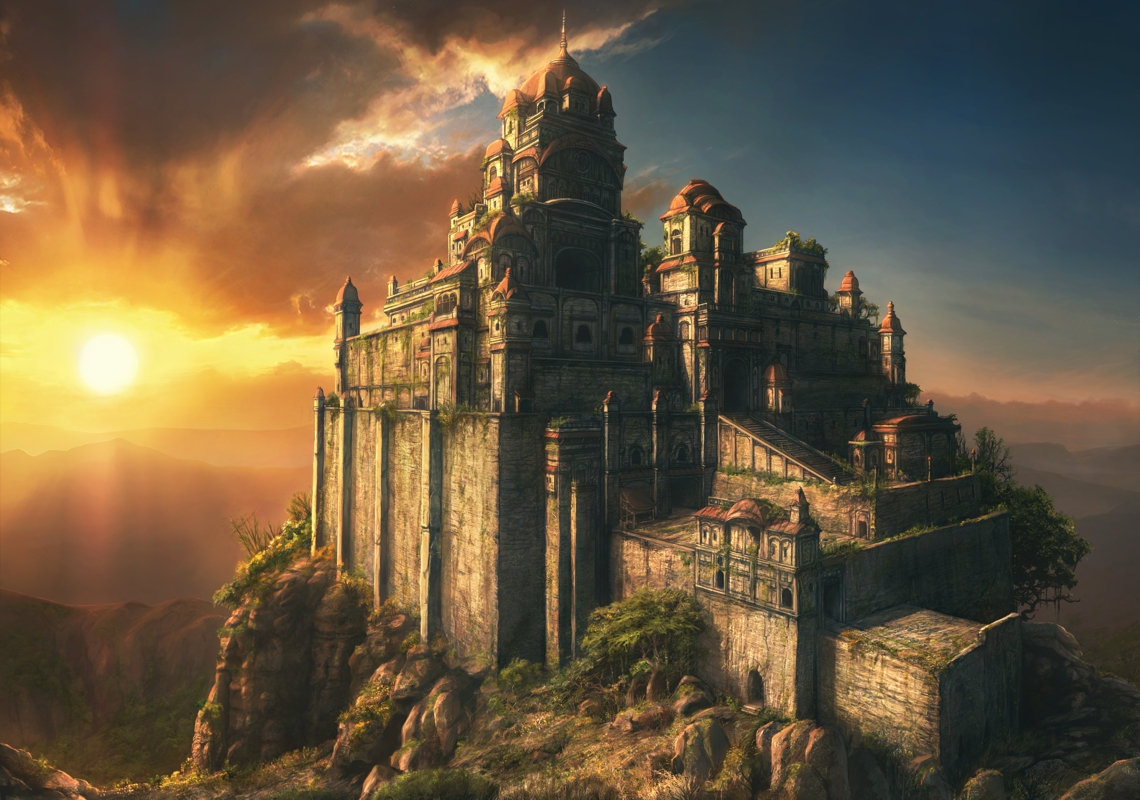 Jonas De Ro is a Belgian artist specializing in concept art and photography. He’s working on the upcoming science-fiction movie Jupiter Ascending, directed by the Wachowski siblings (The Matrix).

“Lost Citadel” has a great abandoned-ruins feel and a breathtaking vista. We’re delighted to have it as the cover art for our Fourth Anniversary Double-Issue.

“The Tiger’s Turn,” by Richard Parks

On the face of the matter I had to agree. While the estate would technically belong to the Imperial Family, I had been assigned the position of steward–quite a handsome income. “Security is the greatest illusion of all, Kenji-san. As for my poverty, it was more of a problem when I was drinking. Don’t mistake me–I am not ungrateful. I am merely puzzled.”

“The Calendar of Saints,” by Kat Howard

“She wasn’t my opponent when I executed her.” I accept mortal commissions; I’ve killed before. Those deaths were honest. Magdalena’s was a waste, and my hands are filthy with it. With a casual nod, from a cleric who knew nothing about the sword-edge of truth, I have been made to feel like a heretic.

“A Spoonful of Salt,” by Nicole M. Taylor

Dr. Benjamin, he was running, running through the rain from one tent to another, trying to save his Story Eater and those pasty wax circles he’s spent so long collecting and, once, he looked up. Mala was sitting there on the top of the sea wall. She wasn’t wearing a rain slicker or even shoes and she was just looking at him like he was a rat, like he was a bug. Like he was something with too many eyes and too many legs and all she wanted to know was what ridiculous thing he was going to do next.

A Seraph approaches me with two brands, red?hot from the coals. The first is Adultery, and it blackens my right cheek. I bite my tongue to swallow the scream. The second is Death, and it sears my forehead. This time I do scream.

Aidan’s color had worsened overnight, and one of his ears had sloughed off, replaced by shiny grey scar tissue. His eyes were the only part of him still fresh and wonderful. He smiled at me when he woke and saw me examining him. “Morning.” He coughed and spit a tooth into his palm. “Sorry.”

I didn’t have to ask whom he meant, but it seemed that Daiki, in this one regard, was not going to get his wish. The bushi produced two flea-bitten, scruffy men. Both were bruised and bloody but alive. Two more were not. Daiki kicked the body so that it rolled face up and studied the dead man’s features. “It would seem the bandit has escaped me after all.”

The third anniversary of BCS is next week! We will have new cover artwork, the release of the new BCS anthology, and our Third Anniversary Double-Issue. More details all week....

“Lady of the Ghost Willow,” by Richard Parks

I had little talent for poetry, but my instruction in the classic metaphors was probably no less extensive than Akio’s. The poem was both an entreaty and a question; that much was clear. But what was the answer? One who might be able to tell me was beyond speech now and might be for some time, if not forever.

“The Curse of Chimère,” by Tony Pi

I walked down the aisle, passing frozen spectators whose eyes were riveted to the screen and weeping blood. I recognised the Mayor immediately by his bold muttonchops, and beside him, the actor Franchot Aucoin, whose lecherous exploits were as legendary off-screen as on. Both men were bleeding as though their eyes had been gouged out and pressed back in.

“The Girl Who Tasted the Sea,” by Sarah L. Edwards

A lift of a wing and their soaring arc encompassed the whole of the house. They swung around it and Abby could see them now, the twin pillars of stone upon which she’d lived all her life. Suddenly she was dropping nearer, nearer, and then they landed in the carved hollow in one pillar just a foot above the tide. She ignored the trembling in her legs as she crouched at the edge and dipped her fingers in the water.

“More Full of Weeping Than You Can Understand,” by Rosamund Hodge

For the first few years, she only passed information, while the reports of faery incursions began to grow. Then–when they went to London for Violet’s introduction into society–three things happened. The faeries turned the Prime Minister’s fingers into twigs and his eyes into acorns. Papa died. And Thomas discovered what she was.

They landed in the carved hollow in one pillar just a foot above the tide. She ignored the trembling in her legs as she crouched at the edge and dipped her fingers in the water.

If you’ve enjoyed the first two years of Beneath Ceaseless Skies, please consider supporting us by helping spread word about BCS or by making a donation. We are a 501(c)(3) non-profit organization, so any donations are tax deductible. Thank you very much. 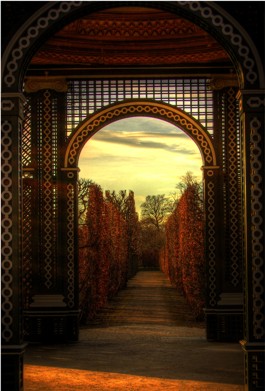 You can read more about Wolfgang and his art on our Cover Art page.

This week marks the second anniversary of BCS! Since we started in Oct. 2008, we’ve published 52 issues, including 45 podcasts and over a hundred stories. Wow!

To lead up to this Anniversary Double-Issue, we’ll have some posts about the authors and cover art and things other people are blogging about BCS. Enjoy!