So if you want to get every issue of BCS early, or have them sent direct to your email or Kindle or any other device with an email address, or support us in paying for great fiction, and get a free BCS anthology while doing any/all of the above, act now!

If we total at least 100 subscriptions during the sale, all new subscribers will be entered in a drawing for a free Kindle.

See our ebook subscription partner WeightlessBooks.com for all the details.

Ebook subscribers get issues early, before they are released on the website, and can have issues sent direct to their email or Kindle or any device with an email address.  Subscribing is also a great way to support BCS; to help us pay our authors and artists.

During this sale, you’ll get the free BCS anthology too, and if we sell at least 100 subscriptions, all new subscribers will be entered in a drawing for a free Kindle.

See our ebook subscription partner WeightlessBooks.com for all the details:

Get every issue early and sent right to your email or e-reader, get a free anthology, and support BCS at the same time! 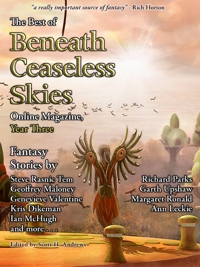 To celebrate the fourth anniversary of BCS and our new ebook anthology The Best of BCS, Year Three, we’re having a sale on ebook subscriptions and anthologies!

We’ve also dropped the price of Best of BCS Year Two to $2.99.  And if we get at least 100 new or renewal subscribers during this sale, all those subscribers will be entered in a random drawing to win a free Kindle e-reader.

Ebook subscriptions are only $13.99 for 26 issues/52 stories (that’s 27 cents a story!).  Subscribers will get our Fourth Anniversary Double-Issue, featuring Richard Parks and Marissa Lingen, including two stories which won’t be released on the website until a week later.

Why should you buy an ebook subscription to BCS, when the stories are available on the website?

-Ebook subscribers get new issues before they are released on the website (next week’s issue is already out, eight days early)

(If you bought a subscription in the past month, contact us or Weightless Books, and we’ll give you the free anthology too.  We appreciate you having supported us already.)

The sale and the free Kindle giveaway will end in early October, so make sure you buy your subscription or Best of BCS Year Three at Weightless Books soon in order to get the free anthology. Thanks very much for your support!

These are just a few of the awe-inspiring fantasy stories in The Best of Beneath Ceaseless Skies Online Magazine, Year Three, our new ebook anthology of eighteen stories from the third year of BCS.

The Best of BCS, Year Three is available for only $3.99 at select ebook stores, like WeightlessBooks.com, with more ebook stores coming soon. All proceeds go to help pay BCS authors and artists for their work.

Special Offer: to celebrate the release of Best of BCS Year Three and the fourth anniversary of BCS, we’re running an ebook sale and subscription drive.

This offer ends in early October. More details are at Weightless Books. 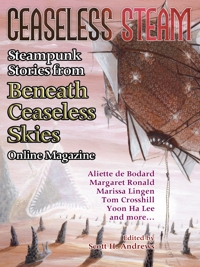 The brand new BCS anthology is now out: Ceaseless Steam, Steampunk Stories from Beneath Ceaseless Skies.

Worlds flavored with steampunk’s blend of early industrial technology and pre-modern culture have great opportunity for awe and wonder.  Add nuanced characters moving through those worlds, and it’s exactly the kind of story we love.

And buying a copy of Ceaseless Steam, or any of the BCS anthologies, is a great way to support BCS while enjoying awe-inspiring stories on your E-Reader, smart phone, or other device.

As part of the BCS third anniversary coming next week, the new Best of Beneath Ceaseless Skies, Year Two anthology is now out!

The Best of BCS, Year Two has sixteen stories and novelettes from the second year of BCS, by authors including Marie Brennan, Yoon Ha Lee, Saladin Ahmed, Rachel Swirsky, and Aliette de Bodard.

All proceeds go to pay BCS authors and artists for their work, so buy a copy to read great literary adventure fantasy and support BCS.

Beneath Ceaseless Skies is now available as a subscription delivered automatically to your Kindle!

To have each new issue of BCS automatically emailed to your Kindle (or any other device that has an email address), buy a BCS subscription through ebook store WeightlessBooks.com and sign up for their direct-delivery to your Kindle.

The 12-month subscription has 26 issues and costs only $13.99 (compared to $26 for the Kindle issues purchased separately). Subscription issues are released two days before those stories appear on the website. All proceeds go directly to paying our authors and artists for their work.

Weightless Books is an indie ebook store that has lots of other great F/SF magazines, available in Kindle format and many other formats. They also now have single issues of BCS.

BCS readers have been asking for a Kindle subscription for a while now, and we’re pleased to be able to offer it.

What would really be tempting would be a year-long subscription delivered through Amazon, which doesn’t seem to be available.

It would be cool, but Amazon does not allow Kindle subscriptions anymore.

We at BCS are committed to getting our magazine to readers in whatever formats work best for them, so rest assured that we are exploring all options. And thanks very much for your interest!

Weightless Books is an indie e-book store that carries great F/SF titles, including lots of short fiction anthologies and magazines. One sign of that is how they have other titles for sale from many of the authors in The Best of BCS Year One, including Richard Parks, Yoon Ha Lee, and Holly Phillips.

Check out the anthology, if you haven’t already, and check out Weightless Books.