A Sin for Freedom
Eboni J. Dunbar
And what was I? The only difference between us was that I had repented.
What the Mountain Takes, What the Journey Offers
Jae Steinbacher
It’s a journey lovers and pilgrims take—to exchange vows or to petition Mother.
Recent Comments
Author Interview: Saladin Ahmed on Throne of the Crescent Moon
Issue #87
Size / Zoom

BCS: How have Dr. Adoulla and Raseed, and the world of the Crescent Moon Kingdoms, changed or evolved from the debut story to the novel?

Ahmed: Throne of the Crescent Moon takes place two years after “Where Virtue Lives.” As the novel opens, Raseed – who has been apprenticed to Adoulla all this time – is perhaps a bit more used to the Doctor’s heterodox ways. But as he’s grown into a man, he’s begun to question both his training and Adoulla’s teachings anew.

And Adoulla himself is even wearier and more fatigued. His relationship with Miri, hinted at in “Virtue,” comes to a wrenching crisis point in Throne.

The tone of the novel is darker and a bit less... picaresque than “Virtue,” though there’s still some hopefully funny stuff in there. And of course, at the novel level, one can explore everything – the world, the magic, the monsters, the city – more extensively.

So Throne is sketched in greater detail, darker, and wider in scope than “Virtue.” Adoulla and Raseed wrangle with larger threats and greater self-doubts. But I think anyone who enjoyed this story will like the novel even more! 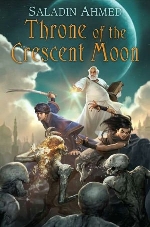 Thanks very much to Saladin for speaking with BCS!

To enter to win a copy of Throne of the Crescent Moon, check out the giveaway. Enjoy (re)reading the story and the novel!

Saladin Ahmed’s first novel, Throne of the Crescent Moon, featuring the same characters as his story “Where Virtue Lives” in Beneath Ceaseless Skies #15, was a finalist for the Hugo, Nebula, Crawford, Gemmell, and British Fantasy Awards and won the Locus Award for Best First Novel. He was nominated twice for the Campbell Award for Best New Science Fiction/Fantasy Writer for his short stories, which have appeared in Year’s Best Science Fiction and have been translated into a half-dozen languages. He has also written nonfiction for NPR Books, Salon, and The Escapist. He holds an MFA in poetry from Brooklyn College, an MA in English from Rutgers, and lives near Detroit with his wife and twin children.

If you liked this interview, you may also like:
“Where Virtue Lives” by Saladin Ahmed
Return to Issue #87
Comments & Scrivenings
Leave a comment on “Author Interview: Saladin Ahmed on Throne of the Crescent Moon”