A Sin for Freedom
Eboni J. Dunbar
And what was I? The only difference between us was that I had repented.
What the Mountain Takes, What the Journey Offers
Jae Steinbacher
When my lover gets the Burning, I prepare to go to the Binding Place, where the mountain meets the sea. Even in her delirium, she smells the offering meal cooking and sees my half-full pack. She begs me not to go. It’s a journey lovers and pilgrims take—to exchange vows or to petition Mother. The paths to the mountain shift with their travelers’ intentions, and we were much younger when we traveled there to be wed. I squeeze her hand. “I can’t stay and watch you fade.” There’s only one certain cure for the Burning. If I don’t go, Menrie...  Read more »
Recent Comments
Issue #170
Size / Zoom 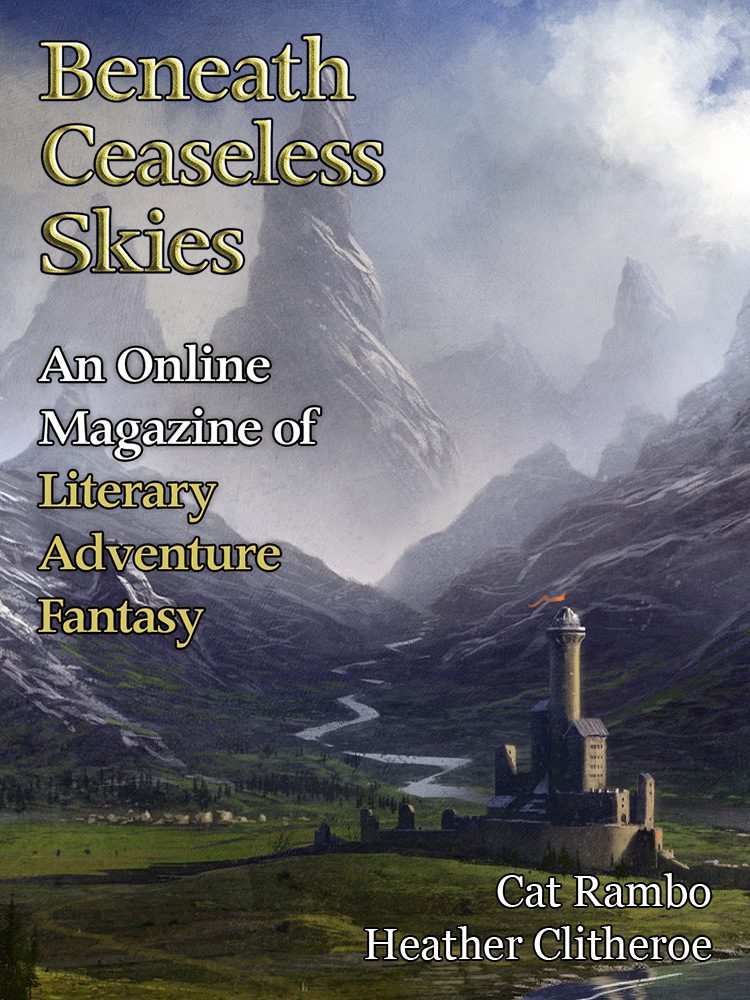 Featuring new cover art: “Twisted Mountain Valley” by Christopher Balaskas. Enter giveaways to win a signed copy of Cat Rambo’s new novel Beasts of Tabat, set in the same world as “Primaflora’s Journey,” or a signed copy of her collection Near + Far.

After that it became an act of defiance, growing out her hair. Every morning she lay in her cell amid the mass of it she had strained to produce over the course of the night, feeling herself drawn thinner, tighter, counting the sweet hay smell surrounding her a victory.

She wasn't even sure how long they had been here. It was still winter, still cold outside, and the winds that penetrated this sheltered wing of the castle held an edge of ice.
Wild Things Got to Go Free
Heather Clitheroe

My cousin Ren was waiting for Mama in the kitchen, pacing. When he looked at me, I saw the flickering light in his eyes, just like Mama's. He was going away, too. It looked like nobody would get to say goodbye to him properly, either. I hated the soldiers so much it hurt.

In our village, some of the grown-ups went away and they didn't come back.
Audio Fiction Podcast:
The Sixth Day
Sylvia Anna Hivén

Except one day, Cassie ain't telling me what will vanish. She tells me something's coming.
From the Archives:
Of Thinking Being and Beast
Michael J. DeLuca
Boreas crushed the keys in his palm to silence them.
text