A Sin for Freedom
Eboni J. Dunbar
And what was I? The only difference between us was that I had repented.
What the Mountain Takes, What the Journey Offers
Jae Steinbacher
It’s a journey lovers and pilgrims take—to exchange vows or to petition Mother.
Recent Comments
Issue #192
Size / Zoom 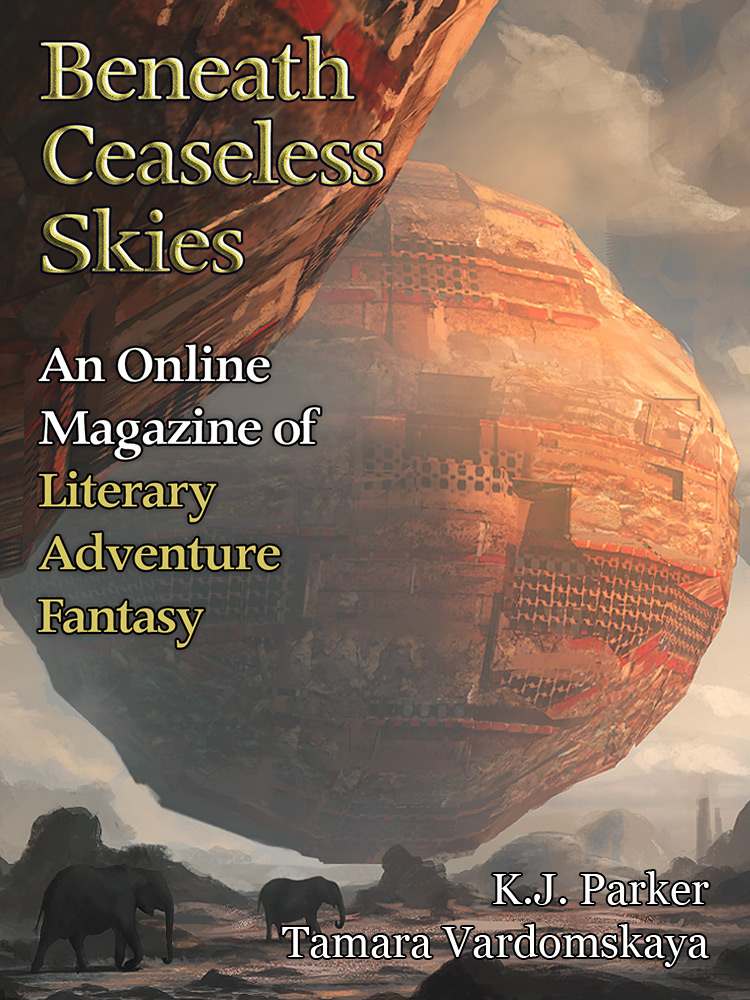 Featuring new cover art–“Plains of Another World” by Leon Tukker–and our 400th story! A special novelette by K.J. Parker about storytelling and storytellers: “Told By An Idiot.”

Told By An Idiot
K.J. Parker

I accepted that Master Allardyce had the potential to write the greatest play ever; a play so good that if God were to summon Mankind before the bar of Heaven and demand to know one good reason why He shouldn't send a second flood and drown the lot of us, all we'd have to do is hand Him the manuscript and there'd be no case to answer. I knew that, in order to write this play, Master Allardyce needed to drink himself stupid, get beaten up twice a week, and generally mash himself down into a cheese, like the cider-makers do, before he could ferment and distill his very essence into words on a page. But I have a business to run, and I need crowd-pleasers. Master Allardyce's monument-more-enduring-than-bronze would just have to wait until I retired. Accordingly, I gave him no peace.

He put his head on one side and thought for a moment. Rather, he acted thought; I wouldn't have given him a job.
The Three Dancers of Gizari
Tamara Vardomskaya

It dawned on me that he enjoyed watching me squirm; a proud competent woman but to him just Nahemiah’s commoner puppet. “Ten thousand!” I spat out the words intentionally in the heaviest Tavalland accent that the theater had eradicated in me twelve years before. “Ten thousand thalers for your measly sculpture that the Opera rejected!”

Except that I learned that if they spoke truth, it was not to me.
Audio Fiction Podcast:
The Three Dancers of Gizari
Tamara Vardomskaya

Except that I learned that if they spoke truth, it was not to me.
From the Archives:
Great, Golden Wings
Rachel Swirsky
Lady Percivalia sat motionless for as long as she could so that she could savor the thrill.
text