A Sin for Freedom
Eboni J. Dunbar
And what was I? The only difference between us was that I had repented.
What the Mountain Takes, What the Journey Offers
Jae Steinbacher
When my lover gets the Burning, I prepare to go to the Binding Place, where the mountain meets the sea. Even in her delirium, she smells the offering meal cooking and sees my half-full pack. She begs me not to go. It’s a journey lovers and pilgrims take—to exchange vows or to petition Mother. The paths to the mountain shift with their travelers’ intentions, and we were much younger when we traveled there to be wed. I squeeze her hand. “I can’t stay and watch you fade.” There’s only one certain cure for the Burning. If I don’t go, Menrie...  Read more »
Recent Comments
Issue #246 – Science-Fantasy Month 4
Size / Zoom 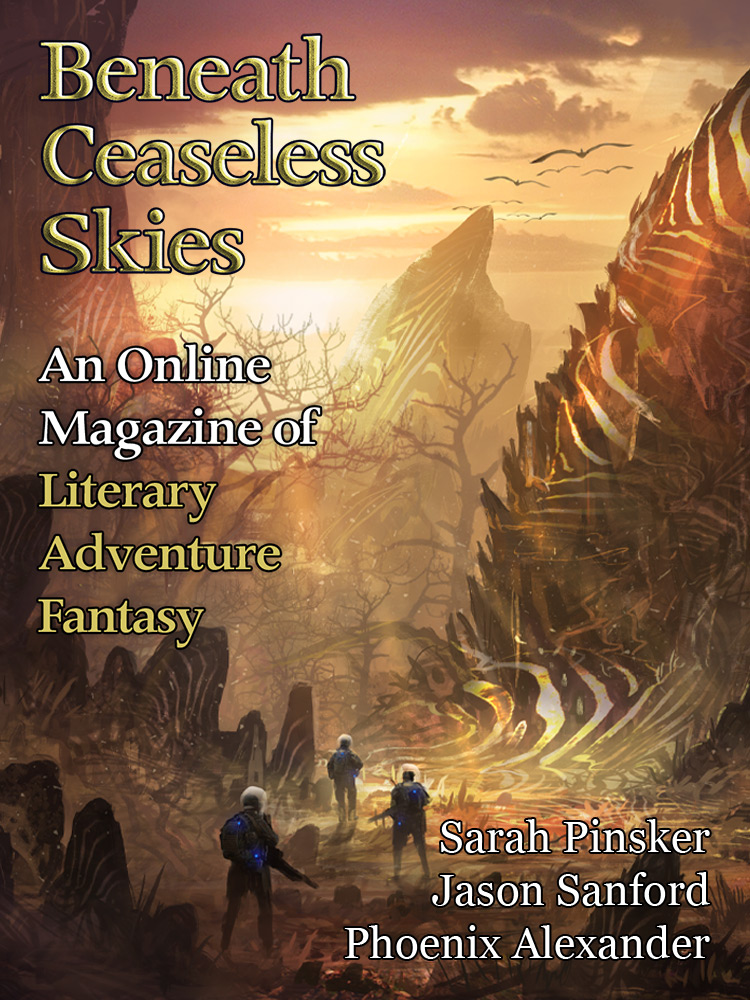 Do As I Do, Sing As I Sing
Sarah Pinsker

At every opportunity, I asked a variation on the question that haunted me: what would happen to my village if Kirren died before I returned? If we weren't special, why didn't they teach more of us, so there would be no risk of my family starving? They never answered.

Colton had never seen grains project random memories like this. It was almost as if something had shattered the collective consciousness of the tiny machines on this land, forcing them to communicate without thought or reason.

She pumps her legs harder, lifts higher. Slapping back. Strike, strike, strike. She cannot slow. She must not sink, stone-skipping on webbed feet. On and on and ever on. Her arms burn with the effort of carrying her child.

She says instead: "because he isn’t coming."
Audio Fiction Podcast:
Gennesaret
Phoenix Alexander

She says instead: "because he isn’t coming."
From the Archives:
The Mote-Dancer and the Firelife
Chris Willrich
Nicolai was three years dead when I lighted to EZ Aquarii to forget him. Naturally he came along too.
text