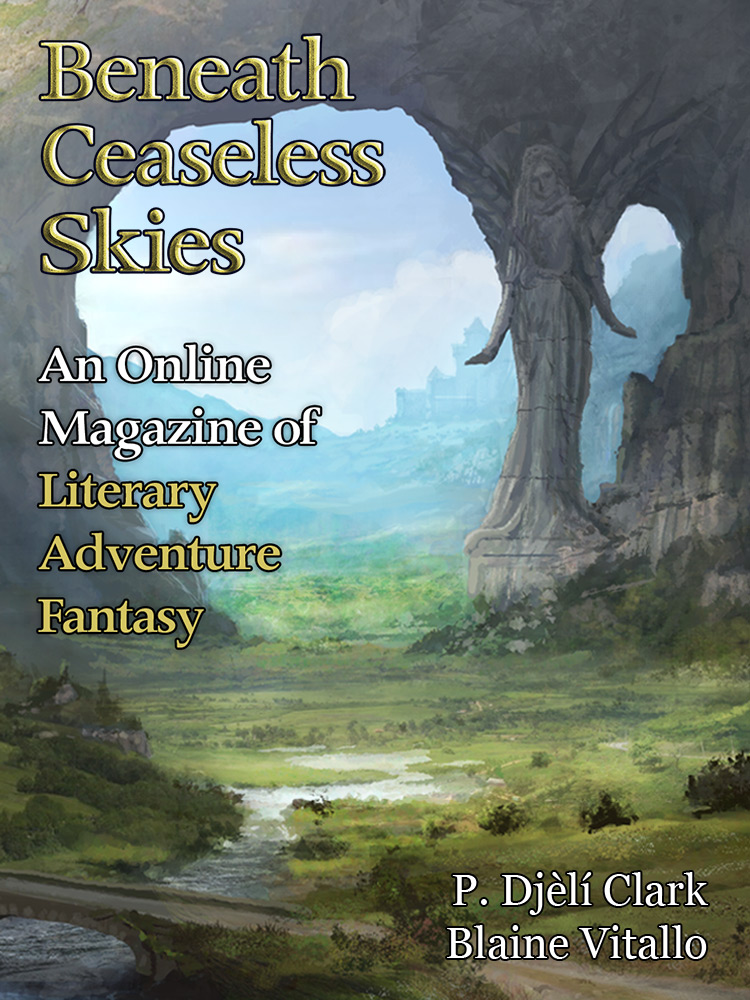 Rana read the woe that wrapped the man—a swarm of blood scorpions that writhed beneath his flesh. Woe was a reciprocal thing. The more you inflicted upon others, the more you gathered. The Goddess’s judgment was quick. This time she imagined a sewing-needle half long as her forearm. Reaching into her satchel she withdrew a fine opaque thread of woe and sewed it into the man, weaving it between the scorpions.

Rana released a weary breath. The gift of the Goddess of Sorrows could be burdensome.
The Weaver and the Snake
Blaine Vitallo

Reilitas clutches tightly her wrought-iron railing as the city guards throttle the thieves and rioters. Wherever she looks she finds destroyed the things she has made. The ambassador's tiled vases are smashed; she had spun them wide to hold his banana trees. The golden automaton in the shrine of the god of prophecy, which she had helped a foreign machinist assemble, has lost all four of its arms, and its topaz eyes have been plucked. A dress that must be her work, woven for a virgin consecrated to the temple, is ripped and fouled in the street.

Reilitas has dreamed of the snake, dreamed of hammering its beautiful onyx scales into ceremonial knives, shields, the faces of clocks.
Audio Fiction Podcast:
The Weaver and the Snake
Blaine Vitallo

Reilitas has dreamed of the snake, dreamed of hammering its beautiful onyx scales into ceremonial knives, shields, the faces of clocks.
From the Archives:
The Book of Autumn
Alex Acks
I made the truth something those duty old men couldn’t ignore.
text