A Sin for Freedom
Eboni J. Dunbar
And what was I? The only difference between us was that I had repented.
What the Mountain Takes, What the Journey Offers
Jae Steinbacher
When my lover gets the Burning, I prepare to go to the Binding Place, where the mountain meets the sea. Even in her delirium, she smells the offering meal cooking and sees my half-full pack. She begs me not to go. It’s a journey lovers and pilgrims take—to exchange vows or to petition Mother. The paths to the mountain shift with their travelers’ intentions, and we were much younger when we traveled there to be wed. I squeeze her hand. “I can’t stay and watch you fade.” There’s only one certain cure for the Burning. If I don’t go, Menrie...  Read more »
Recent Comments
Issue #261, Tenth Anniversary Month Double-Issue I
Size / Zoom 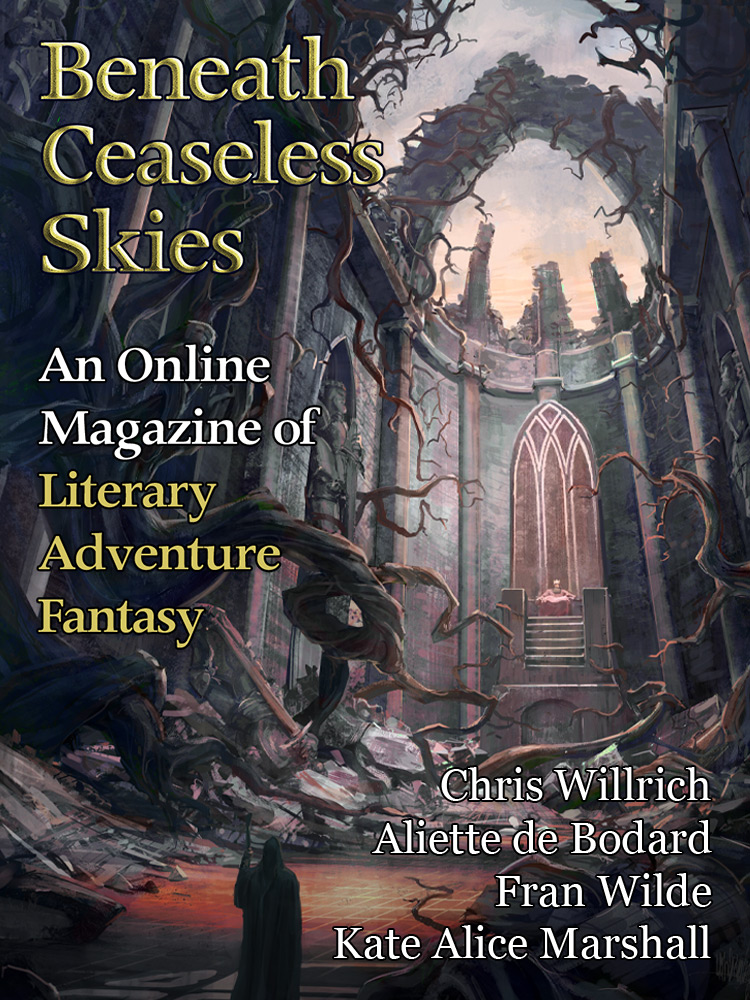 The first of two special double-issues for the month of our tenth anniversary, featuring four stories, a guest-narrated podcast, new cover art “King of Ruins” by Mats Minnhagen, and a giveaway for a signed Caroline M. Yoachim short fiction collection.

Out the cat door I found two hellsnouts remaining below the tower, hopeful of a good rending. I puzzled again as to who—or what—had made the beasts, and why they increasingly threatened our city. Archaeopolis was older than recorded history, and the underground coughed up ancient horrors the way other soil might reveal arrowheads or potshards. But of late, creatures stalked the open air that had no counterpart in story or scroll. Even a black cat might be mildly concerned.

However I, Shadowdrop, most magnificently tragic of black cats, had fears of a different litter that day.
Court of Birth, Court of Strength
Aliette de Bodard

Samariel took in a deep, trembling breath. Asmodeus was watching him, with that distant, amused curiosity, the sketch lightly resting in the palm of his hand. That smell came again, orange blossom, with something else, something tangier and more acidic. Lemon; lime?

"Because he's a fool." Asmodeus's voice was level. How could he—how could he speak what amounted to sedition against the House?
Ruby, Singing
Fran Wilde

“Let me go, Poppa,” I said. "I'll watch out for our interests." I wouldn’t say more. Brac said nothing, but he smiled for the first time. He had dimples, like you do, child. And that was my second mistake, noticing them. For Father's eyes narrowed further.

There are some in Quadril who will call that my first mistake. They'd be wrong, my child.
We Ragged Few
Kate Alice Marshall

I looked at them each. Hard, well-blooded men and women: those wearing Talgrun’s iron yoke, eager to break it, and those with faces tattooed as mine was with the seventeenth knot, the sign of our holding. The fiercest of the holdings, the strongest. We who had lifted our beam half a league from the narrow place, unknowing; who had been harried by the gray more than any other holding and never broken.

And then there was only my blade left to add, pale among the rest, final. We would leave.
Audio Fiction Podcast:
Ruby, Singing
Fran Wilde

There are some in Quadril who will call that my first mistake. They'd be wrong, my child.
From the Archives:
The Sword of Loving Kindness, Pt. I
Chris Willrich
“If this is meant to deter me,” Persimmon Gaunt said, clutching her rope beneath Bone, “I’m deterred.”
text