A Sin for Freedom
Eboni J. Dunbar
And what was I? The only difference between us was that I had repented.
What the Mountain Takes, What the Journey Offers
Jae Steinbacher
When my lover gets the Burning, I prepare to go to the Binding Place, where the mountain meets the sea. Even in her delirium, she smells the offering meal cooking and sees my half-full pack. She begs me not to go. It’s a journey lovers and pilgrims take—to exchange vows or to petition Mother. The paths to the mountain shift with their travelers’ intentions, and we were much younger when we traveled there to be wed. I squeeze her hand. “I can’t stay and watch you fade.” There’s only one certain cure for the Burning. If I don’t go, Menrie...  Read more »
Recent Comments
Issue #262, Tenth Anniversary Month Double-Issue II
Size / Zoom 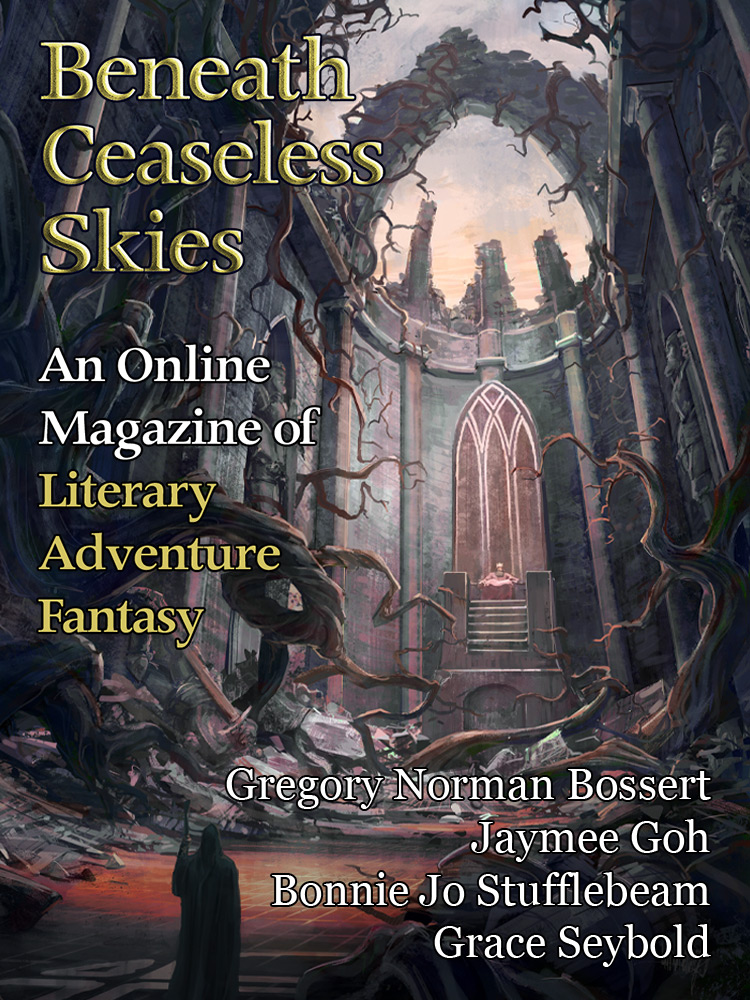 The second of two special double-issues for the month of our tenth anniversary, featuring four stories, a guest-narrated podcast, and new cover art: “King of Ruins” by Mats Minnhagen.

The Tale of the Scout and the Pachydormu
Gregory Norman Bossert

The Poet Laureate was fetched from his retirement in a lighthouse on the far shore of the Founder Mer to compose a song of eighty-six interlocked stanzas like steps on a stairway spiraling down into a cool dim quiet. But on the forty-seventh stanza of its recitation, the Governor squinted into the space over the Poet's shoulder and said, "listen, any deeper and we shall hear the words those beasts sing as they pass" and demanded that the previous stanzas be read in reverse; "back to the surface," he said.

At first, the traditional remedies were attempted.
The Crow Knight
Bonnie Jo Stufflebeam

On one of her rests, Ser Wynn checked the banyo tree; the Lady Loreen had taken an ax to its mouth, destroying its ability to tattle on her evening disappearances. It was then that Wynn knew that Loreen held inside her a rage like that she herself had experienced in her fight with the king father’s bear. The kind of rage that she knew would burn her up if she let it.

“The birds?” Ser Wynn looked around, but the only bird she saw was her own.
Magic Potion Behind-the-Mountains
Jaymee Goh

The magistrate thinks he will go mad. What does it matter what exact angle his wrist must be turned at? But Grandmother Seung scowls at him; opens her mouth to start repeating herself about the need to be present, for the awareness of his intentions in the potion, and if he cannot be aware of his own body’s workings in this last crucial stage of the magic potion, then how will he rein and discipline his mind for the task?

But the magistrate firmly believes that this pursuit will pay off. He will learn the secret magic potion, and he will be vindicated.
The Tragedy of Zayred the Splendid
Grace Seybold

With that she swept her cloak around her and walked smoothly to the door. All eyes watched her. She opened it, sending a skirl of sleet across the threshold, and stepped out into the blizzard. The assembled crowd waited, more than one of them expecting her to pause in the doorway to make some last dramatic pronouncement, but she only drew her hood over her face against the wind and disappeared into the dark. But the story spread...

But the magistrate firmly believes that this pursuit will pay off. He will learn the secret magic potion, and he will be vindicated.
From the Archives:
The Telling
Gregory Norman Bossert
The bees' feet had pricked, Mel remembered, and their fur had tickled as they marched across cheek and through lips, teeth, and tongue.
text