A Sin for Freedom
Eboni J. Dunbar
And what was I? The only difference between us was that I had repented.
What the Mountain Takes, What the Journey Offers
Jae Steinbacher
When my lover gets the Burning, I prepare to go to the Binding Place, where the mountain meets the sea. Even in her delirium, she smells the offering meal cooking and sees my half-full pack. She begs me not to go. It’s a journey lovers and pilgrims take—to exchange vows or to petition Mother. The paths to the mountain shift with their travelers’ intentions, and we were much younger when we traveled there to be wed. I squeeze her hand. “I can’t stay and watch you fade.” There’s only one certain cure for the Burning. If I don’t go, Menrie...  Read more »
Recent Comments
Issue #276
Size / Zoom 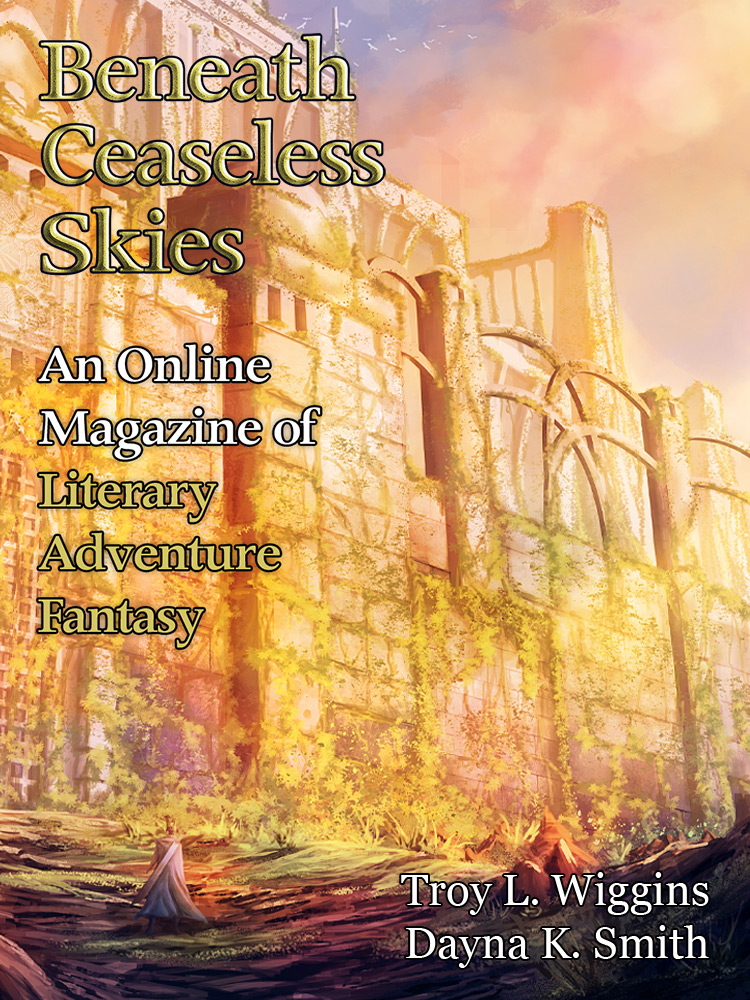 “Give me my shit back,” Fury growled. The sight of her guitar awoke righteous rage in her. It was hers, the last remnant of her family and people, the last thing she carried from her home as it was destroyed, burned in humanity’s war against its divine. Besides Fury herself, the guitar was the only thing that remained to prove that her parents’ love had existed.

Furious Jackson reclined on the banks of the BlackDog river and strummed her guitar for an audience of dead cypress.
Hangdog
Dayna K. Smith

They found him dangling from what was left of a tough old willow. Grinn’s nose couldn’t have missed him, the clean den-smell of hidden wolf beneath the bitter futility billowing from him like wet-leaf smoke. She eased along the dry creek bed from behind. Her choices displeased the palomino, but she could take this other wolf if it came to claws. He was a long fellow, sure, broad-shouldered with shaggy brown hair, but Grinn’s height and heft near matched him.

Grinn punched her chest, thumping the bullet out like the last sweet in the jar.
Audio Fiction Podcast:
Fury at the Crossroads
Troy L. Wiggins

Furious Jackson reclined on the banks of the BlackDog river and strummed her guitar for an audience of dead cypress.
From the Archives:
The Warriors, The Mothers, The Drowned
Kay Chronister
Ana thought the land of the dead would be empty, but it is full to bursting.
text