A Sin for Freedom
Eboni J. Dunbar
And what was I? The only difference between us was that I had repented.
What the Mountain Takes, What the Journey Offers
Jae Steinbacher
When my lover gets the Burning, I prepare to go to the Binding Place, where the mountain meets the sea. Even in her delirium, she smells the offering meal cooking and sees my half-full pack. She begs me not to go. It’s a journey lovers and pilgrims take—to exchange vows or to petition Mother. The paths to the mountain shift with their travelers’ intentions, and we were much younger when we traveled there to be wed. I squeeze her hand. “I can’t stay and watch you fade.” There’s only one certain cure for the Burning. If I don’t go, Menrie...  Read more »
Recent Comments
Issue #283
Size / Zoom 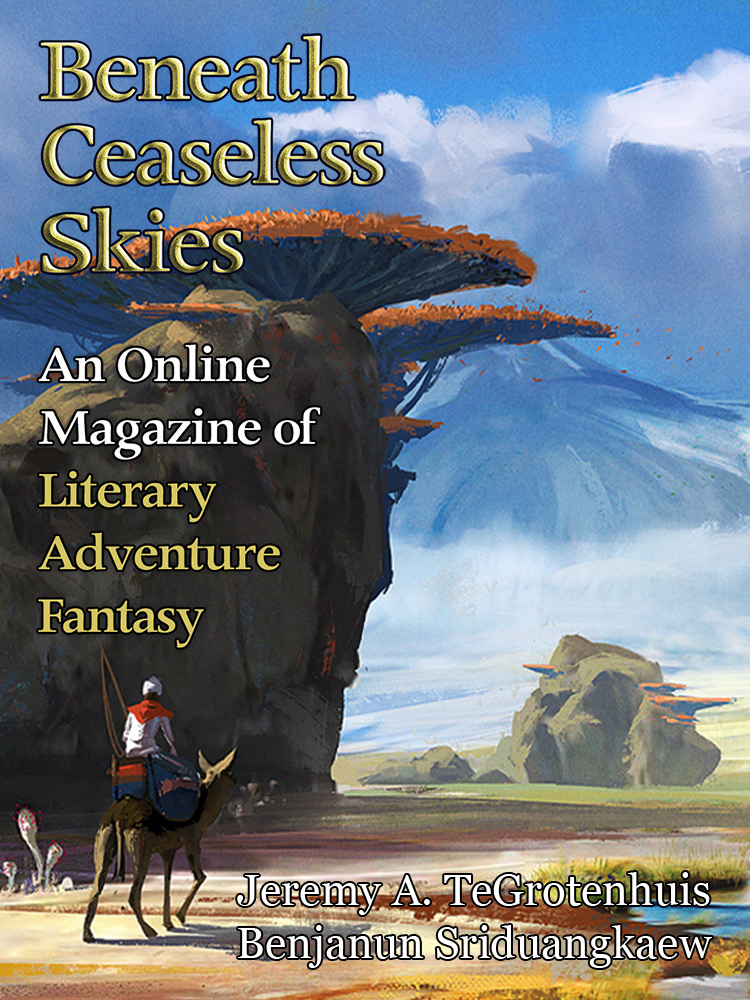 The Iron Eels
Jeremy A. TeGrotenhuis

“Of course, sir,” I said automatically, my mouth forming the words as though I were back on the front, back in uniform, at war. I was not. This was my home, these my people—my wife, my daughter. I was no longer a soldier. But one does not say no to a magiteknician. Especially not one on edge, already struck by a tainted man; his eyes sunken but bright with paranoia.

The dangers my comrades and I had faced in assembling and disassembling the arcane engines of the Magiteknique were the result. Explosions. Unnatural sicknesses. Twistings of organ and bone. Wild magic.
That August Song
Benjanun Sriduangkaew

At dawn, the might of Yneska mobilizes. Twenty vanquishers, thirty-nine pilots. The vanquishers are at their full height, in their various shapes. Some are draped in elongated eyes down their throats and spines; others have slit pupils clustered on their temples. Six-limbed, four-limbed, eight-limbed. As much variation between them as there is between their pilots, who stand in their carapace armor, sleek and jointed.

Sanenya studies the planes of the pilot-priest's face, this conquering creature, this realization of hypotheses and endless toil.
From the Archives:
The Motor, the Mirror, the Mind
T.F. Davenport
Whether we see visions in mirrors or hear voices in warbling electrical static, we must always interpret, extrapolate, confabulate.
text