A Sin for Freedom
Eboni J. Dunbar
And what was I? The only difference between us was that I had repented.
What the Mountain Takes, What the Journey Offers
Jae Steinbacher
When my lover gets the Burning, I prepare to go to the Binding Place, where the mountain meets the sea. Even in her delirium, she smells the offering meal cooking and sees my half-full pack. She begs me not to go. It’s a journey lovers and pilgrims take—to exchange vows or to petition Mother. The paths to the mountain shift with their travelers’ intentions, and we were much younger when we traveled there to be wed. I squeeze her hand. “I can’t stay and watch you fade.” There’s only one certain cure for the Burning. If I don’t go, Menrie...  Read more »
Recent Comments
Issue #287, Eleventh Anniversary Double-Issue
Size / Zoom 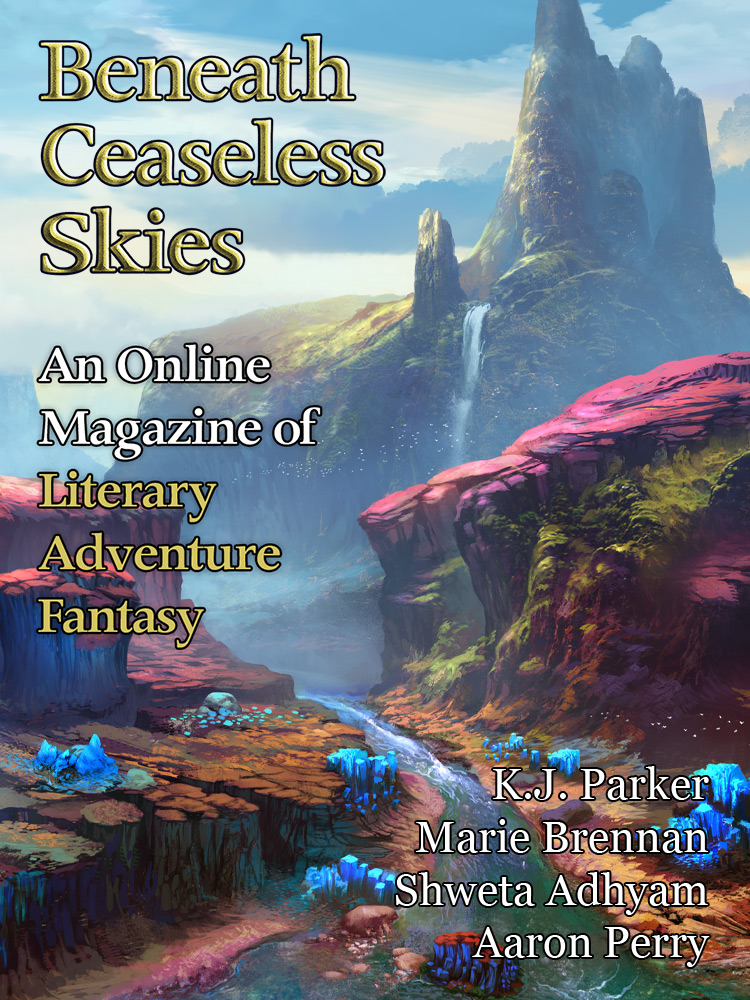 Portrait Of The Artist
K.J. Parker

It all comes down to such tiny differences; if I was one inch taller, then by standing on tiptoe and really, really straining, I could reach the apple on the branch. But when you lack it, one inch, half-inch, quarter-inch is the same as a mile. Depends where you're standing. In my line of work, we call it perspective. A quarter of an inch is all it takes to separate heaven from hell.

“I paint by the inner light,” I said. I tried to make it sound like I was being facetious.
Sankalpa
Marie Brennan

Starvation felt familiar. In my past life I had known how to endure it, how to live for months without the taste of food. I would not call on that knowledge now. My fixed intention was to die. Until a voice spoke from the air. It misunderstood the purpose of my fast, thinking I sought through austerity to accomplish some other end. It offered to grant my desire.

Again and again I died. Better to cut my thread short and start again than waste lifetimes on a path that would not lead me to my goal.
One Found in a World of the Lost
Shweta Adhyam

Desire exploded in the girl's heart at the mention of safety and stability, rest... She quashed it. What would she do in such a world? She was a hunter. But these were gifts that would benefit her pack, gifts worth taking risks for. Even if they came with a large sense of foreboding. "Can you make me invulnerable?" she replied, giving in to the image of her death, the boar's tusks sinking into her and what it would mean for them all if she did indeed die.

The girl shivered at the mention of that name: Pavitra. As if that were someone she should know.
The Witch of the Will
Aaron Perry

Too late did the witch understand what sort of comfort the boy had sought in having his free will removed. He had not wished to know his future but to become bound to it inexorably. In this way, he felt himself absolved. He stood helpless before the sorrow given to him and blameless in the wake of the sorrow he gave to others. Neither guilt nor grief had any power over him now. It left her speechless.

She embraced the one option left to her: not breaking the fate of another but bending it.
Audio Fiction Podcast:
Portrait Of The Artist
K.J. Parker

“I paint by the inner light,” I said. I tried to make it sound like I was being facetious.
Audio Fiction Podcast:
Sankalpa
Marie Brennan

Again and again I died. Better to cut my thread short and start again than waste lifetimes on a path that would not lead me to my goal.
From the Archives:
The Thought That Counts
K.J. Parker
For once in my life, I could walk down the street without looking for places to run to if I heard someone yell my name.
text