A Sin for Freedom
Eboni J. Dunbar
And what was I? The only difference between us was that I had repented.
What the Mountain Takes, What the Journey Offers
Jae Steinbacher
When my lover gets the Burning, I prepare to go to the Binding Place, where the mountain meets the sea. Even in her delirium, she smells the offering meal cooking and sees my half-full pack. She begs me not to go. It’s a journey lovers and pilgrims take—to exchange vows or to petition Mother. The paths to the mountain shift with their travelers’ intentions, and we were much younger when we traveled there to be wed. I squeeze her hand. “I can’t stay and watch you fade.” There’s only one certain cure for the Burning. If I don’t go, Menrie...  Read more »
Recent Comments
Issue #298 – Science-Fantasy Month 5
Size / Zoom 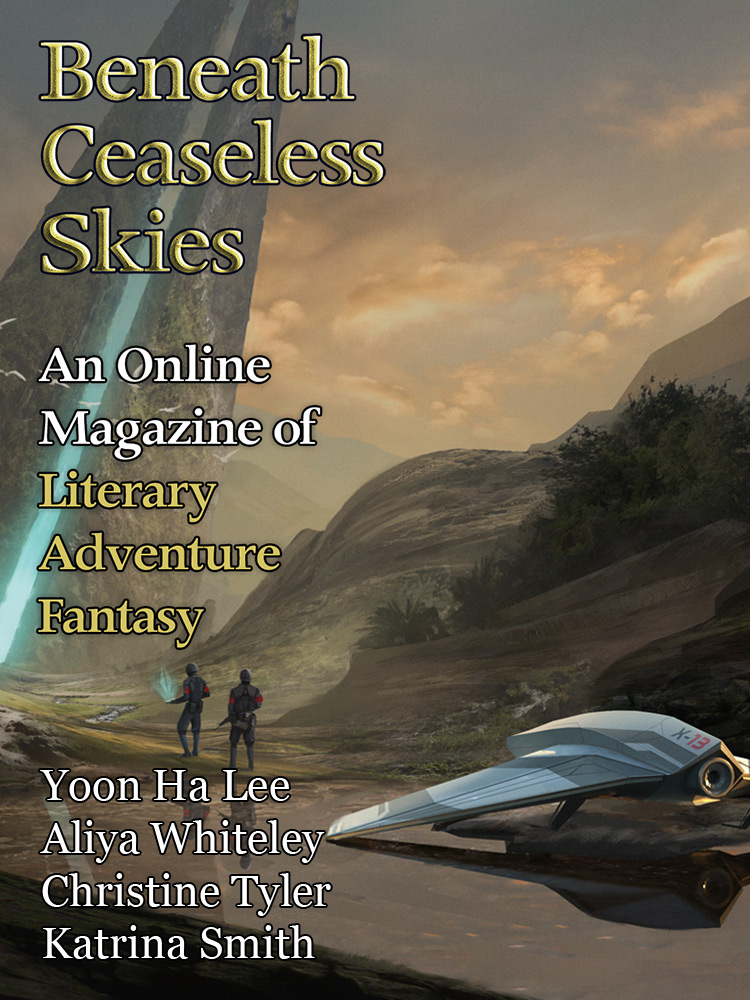 Essarala learned of the traders from her cousins' gossip, and she lingered near the interpreters, watching and wishing. She longed to explore their ship and ask them to take her with them to the stars. But the more she listened, the more she learned, and one thing became obvious: their ship might carry water for its crew to drink, but it didn't contain water for a mer to live in.

This particular mermaid had named herself Essarala, which means seeks the stars in the language of tide and foam.
The Spoils
Aliya Whiteley

“Step forward, Clare Askett,” said the butcher, so she did so. Before the ceremony she had inquired about the possibility of receiving her gift in private and had been told that was not an option. It didn’t help that it was her lot to receive such an unpleasant object. A toenail, no less. It had a laughable element to it. Would anyone snigger, or make a comment, as she approached?

Some carried their cuts from the corpse of the Olme home with bare hands, choosing to follow tradition.
My Sister’s Wings Are Red
Celeste Tyler

I sloshed the nectar around in my mug and slurped it up as quickly as I could. The sickly-sweetness made my proboscis ache and my stomach churn. I dumped the chicken onto a roasting pan with some garlic and onions and opened the oven to get it cooking. “My soufflé!” Priscilla gasped and lunged for the door, but it was too late.

So I headed to the Chrysalis House. The moment I stepped out of the kitchens, the heady tang of pheromones hit me like a blunt axe.
The Glassblower of Galilei
Katrina Smith

I have not been present at a hatching, other than, I suppose, my own. For a moment I watch the cracks grow and light begin to seep through, but I have been instructed to leave and my master’s task awaits. I will be miles and hours away, back at the workshop with Master Damon, before my sister emerges.

I will be miles and hours away, back at the workshop with Master Damon, before my sister emerges.
Audio Fiction Podcast:
The Mermaid Astronaut
Yoon Ha Lee

This particular mermaid had named herself Essarala, which means seeks the stars in the language of tide and foam.
From the Archives:
The Breath of War
Aliette de Bodard
She would have run, but her legs betrayed her—a contraction, locking her in place, as frozen as the baby within her womb.
text