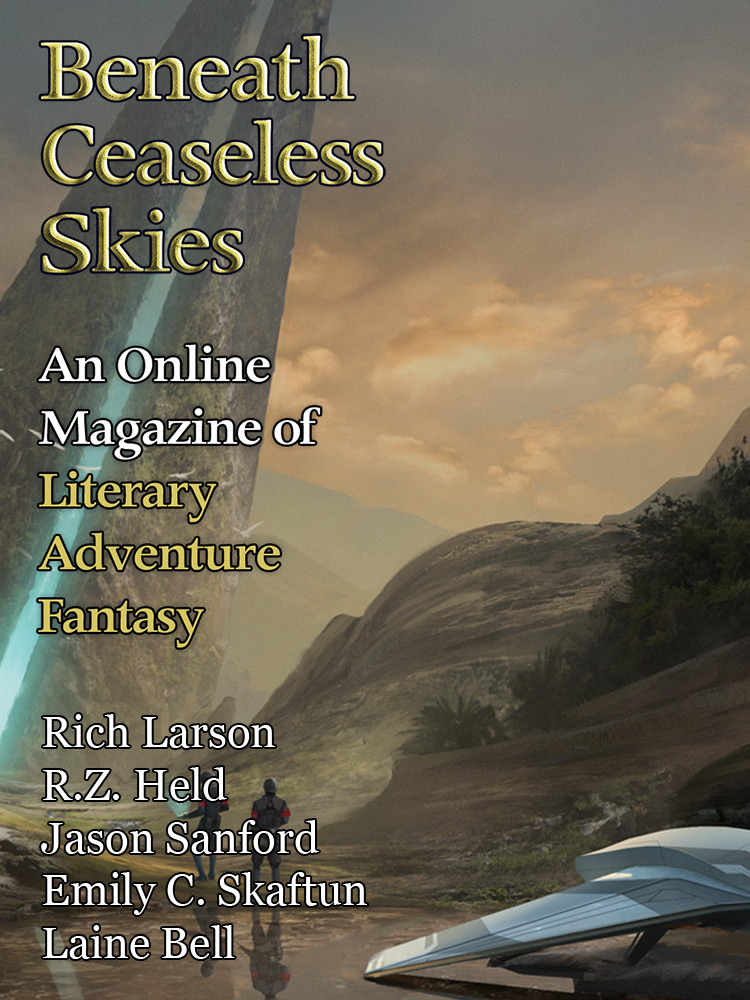 The Sniper and I
Rich Larson

They detached themself from the gun. The nerve cables retracted, including the one from my brainport, which tugged free with a tiny blossom of static. The sniper laid their weapon in its cocoon-like carry case, wiggled backward from the window, then came smoothly upright. They were small without the rifle.

One nerve cable was still in place, snaking from the gun into their skull.
Truth as a Prize
R.Z. Held

The Game had a new player, so Naomi found herself once more frozen in her place, one ghost among the many owned by the Game. Another chance. Another chance for some fool to die and take a place amongst the ghosts, but another chance for Naomi to guide a player to victory. Impossible to have one without the other.

The Game had a new player, so Naomi found herself once more frozen in her place, one ghost among the many owned by the Game.
Where the World Ends Without Us
Jason Sanford

Dozens of ghostly figures lit the fields around her--anchors like herself but far bigger, their bodies engorged on the grains’ anger and power, their massive fangs and claws ready to rip apart anyone who defiled the environment. And six years ago they had attacked this very house, to kill the day-fellow family hiding inside.

And now she was to be judged for her predecessor’s crimes?
Only the Messenger
Emily C. Skaftun

“No,” Ennesta says. She walks toward me on her hind legs, unsteadily, other limbs wiggling awkwardly, and it occurs to me that not only is this the first time I’ve seen her navigate in gravity, it also looks like the first time she’s ever tried it. Or at least the first time in her current form. “I just haven’t told you things.”

I’d give three tentacles to be that lucky, just once.
Song of the Water Bear
Laine Bell

We make our line at the farthest edge of the lifefrond, placing ourselves between it and the approaching creatures. I can taste salt-fear in the water around me. These are not rollers, the long whiplike creatures that slither through the water, eating our eggs and biting off our arms and tails. These are nothing we have seen before.

The new creatures find the lifefrond before any of our eggs have hatched.
Audio Fiction Podcast:
The Sniper and I
Rich Larson

One nerve cable was still in place, snaking from the gun into their skull.
From the Archives:
Blood Grains Speak Through Memories
Jason Sanford
Even though the chilled spring day promised nothing but beauty, the grains in Frere-Jones's body shivered to her sadness as she looked at the nearby dirt road.
text