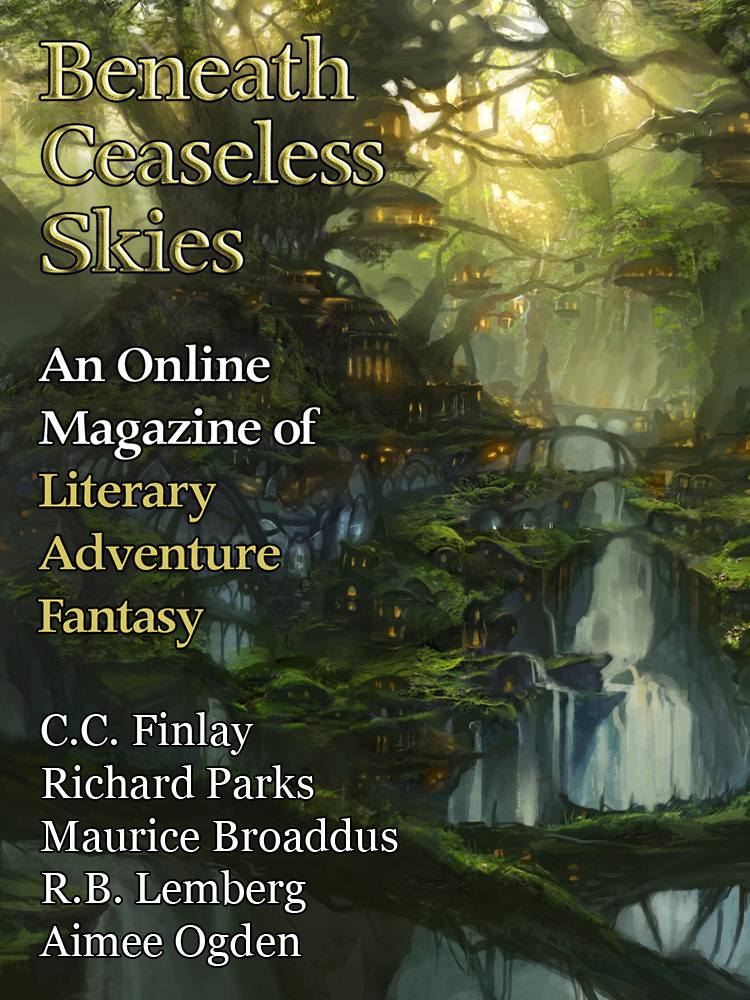 On the off-chance she might survive the night, she reached into one of the jade bowls and grabbed the elegantly shaped skull of a Royal Purple hummingbird. She slipped it into her pocket as a memento. Almost a decade of her life had been devoted to this model temple, since she first asked for hummingbirds for her fourteenth birthday, and now this skull was the only thing she had to show for it.

Kuikin glanced at Vertir. The Dynast dying was pretty much the definition of the worst thing it could be.
Uzumaki of the Lake
Richard Parks

Kenji, once an itinerant priest, was now the abbot of his own small temple, albeit established on my own estates. Yet it was popular among the farmers, which had led Kenji, like myself, into being responsible for more than we ever imagined... or wanted.

I knew from long experience that yūrei could take on shapes not their own in the course of settling unfinished earthly business.
Bound by Sorrow
Maurice Broaddus

Dinga’s words faded into darkness, which suffused the camp. A discomfiting emptiness gnawed at him, one he’d arranged his entire life to avoid. Running from the hollowness of guilt, avoidance had become a way of life. He needed to reconnect with his forgotten lineage. And keep a promise.

“All I understand is that she wanted me to make this journey. Needed me to make it.”
To Balance the Weight of Khalem
R.B. Lemberg

He lifts the onion to the lantern’s lone light, and in it, I suddenly see: the goldwork towers and walls of the Old City; the broken bridge, jagged after a recent bombing yet still shining; rows of humble houses etched in ebullient metal; the curve and sway of the historical museum. I reach out my hand, and he drops the city into it. It feels warm in my palm.

Belowdecks on my berth, I eat everything in the ration packet, but I am not full.
Never a Butterfly, Nor a Moth With Moon-Painted Wings
Aimee Ogden

The Ksmala do not deny us our butterflies. To them the brightscale wings are those of a celestial messenger, not the God and mystic that we see. But they did not often buy our embroidery unless we muted our butterfly rainbows. Because the Ksmala praised the virtue of industriousness, we had begun to sew black ants and golden-brown bees in neat soldier-rows at the edges of tablecloths and the corners of napkins.

Don't forget, daughter-mine. Embroider these things on your heart as well.
Audio Fiction Podcast:
Uzumaki of the Lake
Richard Parks

I knew from long experience that yūrei could take on shapes not their own in the course of settling unfinished earthly business.
From the Archives:
The Crystal Stair, Pt. I
Charles Coleman Finlay & Rae Carson Finlay
She had just killed one of the precious vaimen. In the eyes of the emperor, her life was forfeit.
text