A Sin for Freedom
Eboni J. Dunbar
And what was I? The only difference between us was that I had repented.
What the Mountain Takes, What the Journey Offers
Jae Steinbacher
When my lover gets the Burning, I prepare to go to the Binding Place, where the mountain meets the sea. Even in her delirium, she smells the offering meal cooking and sees my half-full pack. She begs me not to go. It’s a journey lovers and pilgrims take—to exchange vows or to petition Mother. The paths to the mountain shift with their travelers’ intentions, and we were much younger when we traveled there to be wed. I squeeze her hand. “I can’t stay and watch you fade.” There’s only one certain cure for the Burning. If I don’t go, Menrie...  Read more »
Recent Comments
Issue #304
Size / Zoom 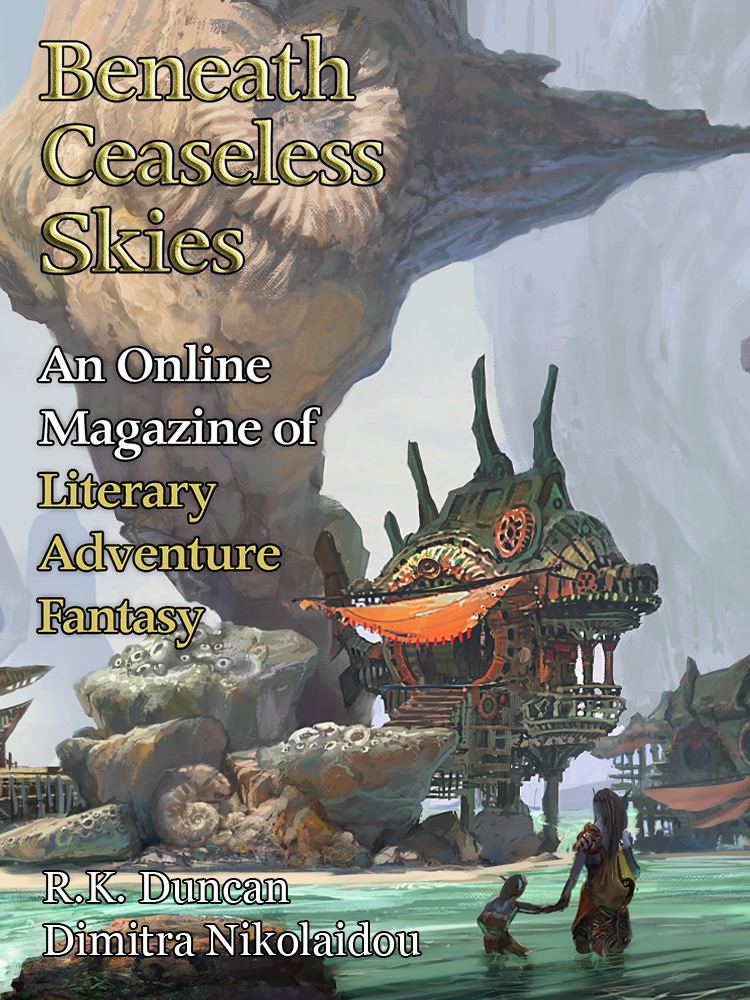 He walked around the chapel, once, twice, three times widdershins. He caught himself and found he had crossed over. The castle walls and towers were all gone, and the stone chapel was a lonely boulder with a great cleft leading into darkness. The forest all around was twisted, tall and thick as the curled hair of a sleeping giant, full of shadows deeper than should have been under the summer sun. The grass was bright as emeralds, richer hued than fine Holland cloth. It was trampled by the hooves of many horses, and their trail led away into the west.

“He’s gone now,” Jack told her, “taken by the king of the elves or some other dark thing, because you shamed him into foolishness.”
The Honey of the World and the Queen of Crows
Dimitra Nikolaidou

The ghost of the Archbishop I had murdered began following me halfway through the trip. You see, he couldn’t cross the nunnery’s walls, but now he had caught me outside, alone. His head was broken in a strange angle, and his hands were cold as ice as they tugged at my skirts. Thankfully he was scared of the holy symbols even in death, and my habit was enough to keep him at bay.

The clock is huge, its heavy frame carved with crow feathers and bees, and I dare not look at it too long for fear the hands will start moving again.
Audio Fiction Podcast:
The Honey of the World and the Queen of Crows
Dimitra Nikolaidou

The clock is huge, its heavy frame carved with crow feathers and bees, and I dare not look at it too long for fear the hands will start moving again.
From the Archives:
Boat in Shadows, Crossing
Tori Truslow
"Child of fish and ghost," said Bue. "What could be quicker?"
text