A Sin for Freedom
Eboni J. Dunbar
And what was I? The only difference between us was that I had repented.
What the Mountain Takes, What the Journey Offers
Jae Steinbacher
When my lover gets the Burning, I prepare to go to the Binding Place, where the mountain meets the sea. Even in her delirium, she smells the offering meal cooking and sees my half-full pack. She begs me not to go. It’s a journey lovers and pilgrims take—to exchange vows or to petition Mother. The paths to the mountain shift with their travelers’ intentions, and we were much younger when we traveled there to be wed. I squeeze her hand. “I can’t stay and watch you fade.” There’s only one certain cure for the Burning. If I don’t go, Menrie...  Read more »
Recent Comments
Issue #307
Size / Zoom 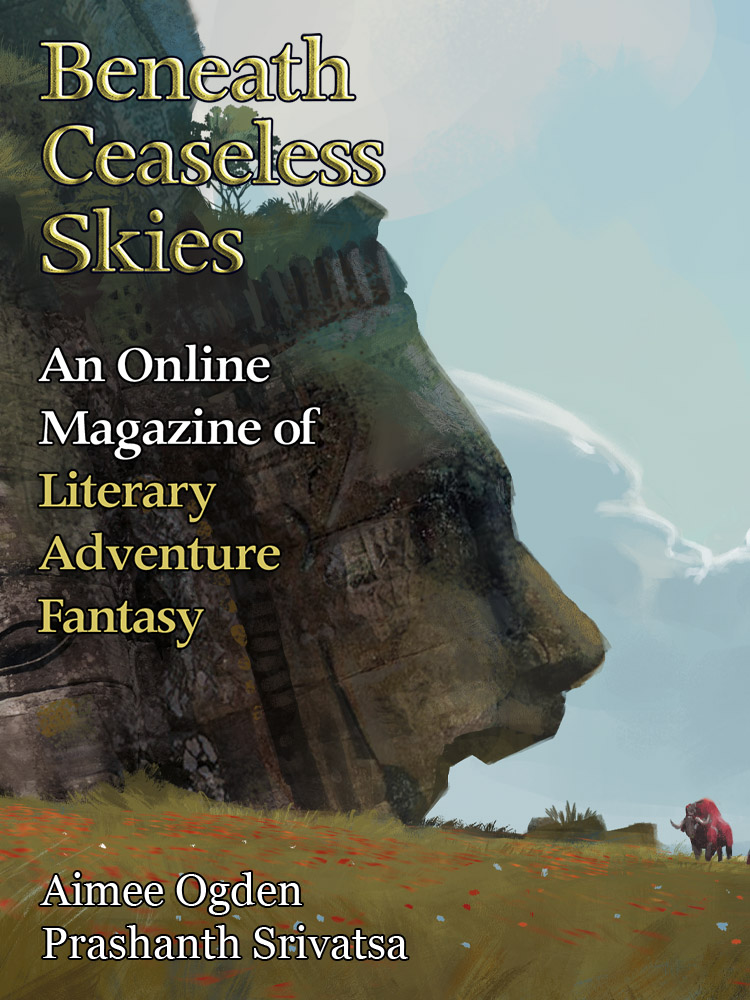 The old woman had no human mourners, so Willowbright stayed; if not to mourn, then to mark her passing at least. By the time the widow's grave had been covered over and the gravediggers sat atop the new wound in the earth to pass a cup between them, the moon had pressed its thumbprint deep into the sky. Willowbright wrapped her arms around her hollow stomach.

The old woman had no human mourners, so Willowbright stayed; if not to mourn, then to mark her passing at least.
Seven Dreams of a Valley
Prashanth Srivatsa

I urged the men to pack their belongings and abandon the village. But the boy who had become a man laughed and said that he had never met anyone who, when a fire began to burn, advised to walk towards it instead of running away. So, as we lay in the quiet of the lake, I sang them a song of endurance, taught to me by the warriors of the desert, to whom I would unfailingly go every year carrying letters from their families, smudged in tears.

On the fourth night... ...I was at a wedding.
Audio Fiction Podcast:
Seven Dreams of a Valley
Prashanth Srivatsa

On the fourth night... ...I was at a wedding.
From the Archives:
The Night Bazaar for Women Becoming Reptiles
Rachael K. Jones
One, two, three eggs into her mouth, one sharp bite, and the clear, viscous glair ran down her throat.
text