A Sin for Freedom
Eboni J. Dunbar
And what was I? The only difference between us was that I had repented.
What the Mountain Takes, What the Journey Offers
Jae Steinbacher
When my lover gets the Burning, I prepare to go to the Binding Place, where the mountain meets the sea. Even in her delirium, she smells the offering meal cooking and sees my half-full pack. She begs me not to go. It’s a journey lovers and pilgrims take—to exchange vows or to petition Mother. The paths to the mountain shift with their travelers’ intentions, and we were much younger when we traveled there to be wed. I squeeze her hand. “I can’t stay and watch you fade.” There’s only one certain cure for the Burning. If I don’t go, Menrie...  Read more »
Recent Comments
Issue #316
Size / Zoom 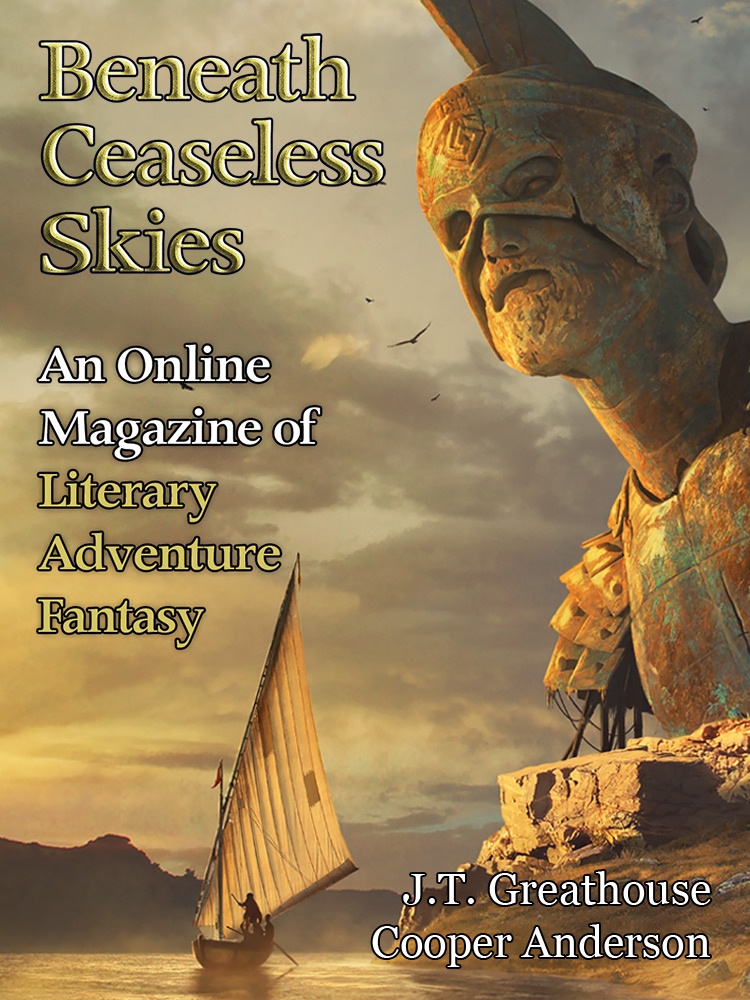 The Gwyddien and the Raven Fiend
J.T. Greathouse

“Enough!” Llewyn shut his eyes. When he opened them the veil returned, bathing the world again in mortal normalcy. He stared at the space above the altar, where he knew the raven fiend still crouched, hidden from him now. Still watching him. Old and powerful enough, he hoped, to consider him little threat.

Boundaries he had been created to defend, long ago, on a dark night buried in cold earth, with ghostwood and silver biting his flesh...
A Land of Blood and Snow
Cooper Anderson

While we waited for the hourglass, the blacksmith dug a line in the snow with the heel of his boot. This would be the starting point. Until the final grain of sand fell to the bottom, the prince could not cross it. Some of the older boys had once told me that the sand inside was the long dead ashes of Dracula himself, but I don’t know if I truly believe them.

There is no safety for us anymore in the waxing and waning of the moon.
Audio Fiction Podcast:
A Land of Blood and Snow
Cooper Anderson

There is no safety for us anymore in the waxing and waning of the moon.
From the Archives:
Father’s Kill
Christopher Green
I lock both Father and the night away.
text