A Sin for Freedom
Eboni J. Dunbar
And what was I? The only difference between us was that I had repented.
What the Mountain Takes, What the Journey Offers
Jae Steinbacher
When my lover gets the Burning, I prepare to go to the Binding Place, where the mountain meets the sea. Even in her delirium, she smells the offering meal cooking and sees my half-full pack. She begs me not to go. It’s a journey lovers and pilgrims take—to exchange vows or to petition Mother. The paths to the mountain shift with their travelers’ intentions, and we were much younger when we traveled there to be wed. I squeeze her hand. “I can’t stay and watch you fade.” There’s only one certain cure for the Burning. If I don’t go, Menrie...  Read more »
Recent Comments
Issue #327
Size / Zoom 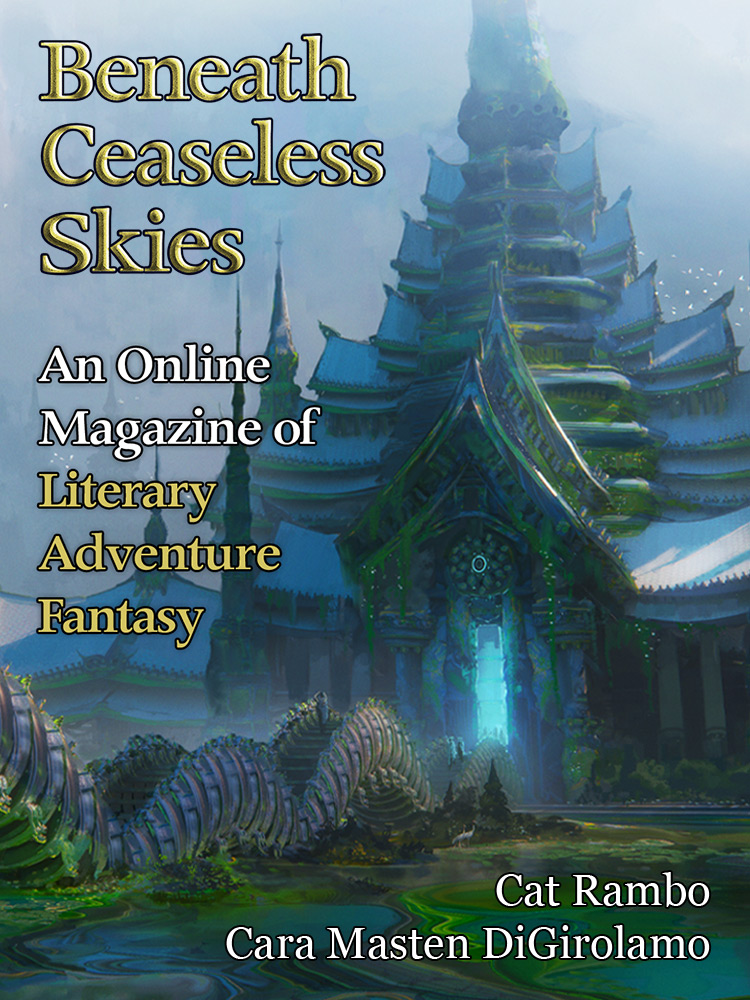 Every Breath A Question, Every Heartbeat an Answer
Cat Rambo

She wanted to ask the nurse at her elbow if any of the others had survived, but while she was thinking about how she might phrase it, the woman gestured to a padded wooden dais meant for centaurs and abandoned her to the sunlight. She wondered how long she would be left there. This dais was close to the hedge maze’s entrance. A figure sat there on the long stone bench. Where the sun fell, the surface along her limbs and chest greened: a Rose Knight.

A walk that would have taken her seconds once now was a handful of moments for each tiny leg of it, stopping to replenish herself.
Concerto for Winds and Resistance
Cara Masten DiGirolamo

The piece was by a composer from Labadi. The trumpet had gone to the library to find out more about him, but all the books on Labadi were gone. The Dictator wanted the trumpet's home to not exist, to not ever have existed. Every rehearsal made the ache inside him hurt worse—the Labadin words in the margins, the little changes the conductor would make. She would bring in new pages, switching a part from one instrument to another, each time making it sound more like home.

"Now," the new conductor said once they were tuned, offering a smile that promised infinite secrets. "We begin."
From the Archives:
The Oracle and the Sea
Megan Arkenberg
Every month when the soldiers bring her supply of flour and milk, they also bring waterproofed parcels of manuscript paper and cool bricks of ink.
text